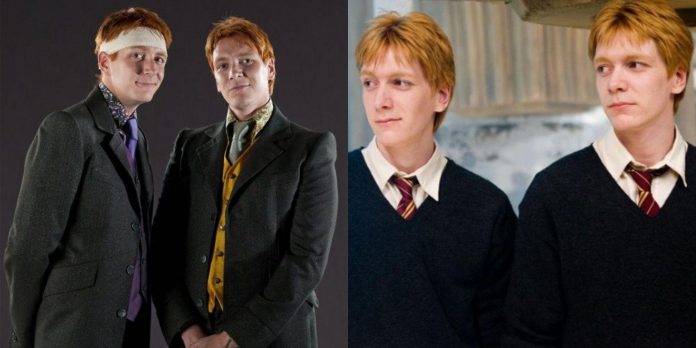 Fred and George are some of the most beloved characters Harry Potter. Their creative jokes, brilliant inventions and heroic traits make them dynamic and fascinating characters. Moreover, the Weasley twins are also known for their sarcastic and witty sense of humor.

When Fred and George tried their products on themselves
Ron: “I don’t see any boils.”
Fred: “No, well, you wouldn’t. They are not in the place that we usually show to the public.”
George: “But that makes sitting on a broomstick a real headache…”

When Ron, Fred and George are considering ideas on how to give up Quidditch training, the twins suggest using one of their Skiving Snackbox snack boxes, a candy of their own invention that helps the user pretend to be sick so that he can skip classes. Unfortunately, they can only use Fever Fudge, which causes an unpleasant side effect: “massive boils filled with pus.”

Despite the fact that the Weasley twins eventually open a very successful shop with joke items, it was not easy for them to create them at the beginning of their career. Unfortunately, they had to try their products on themselves, which sometimes clearly prevented them from sitting on a broom.

When Fred and George try to cheer Ginny
up, “We’ll send you a Hogwarts toilet seat!”

At the beginning of Harry Potter and the Philosopher’s Stone, Harry overhears a conversation between the Weasleys in which Ginny is crying because she hasn’t managed to go to Hogwarts yet. Trying to calm her down, Fred and George promise to send her a lot of letters and a toilet seat from Hogwarts.

Since Fred and George constantly violate the rules of Hogwarts, readers are well aware that this pair of troublemakers is quite capable of stealing a toilet seat from school and sending it to their younger sister. Fortunately, they did not fulfill their promise.

When Fred and George didn’t get an “E” in all their owls
“I always thought Fred and I should have gotten an “E” in everything because we exceeded expectations by just showing up for exams.”

In the fifth year of study at Hogwarts, all students must pass exams for OWLS, which can determine their further magical career. These exams have a special rating scale: “A” — “acceptable”, “E” — “exceeds expectations” and “O” — “excellent”.

Despite the fact that Fred and George are brilliant, they decide to use their wits to create chaos instead of getting good grades in school. Every teacher at Hogwarts knows that the Weasley twins are not particularly inclined to academic life, so they will really exceed all expectations just by coming to the exams.

When Percy gets twelve Owls
“If we are not careful, we will have another headman in the family. I don’t think I can bear this shame.”

After Percy gets very good grades in the fifth year, the twins are afraid that he is on his way to becoming a prefect, as their brother Bill did. It’s funny, but two years later Percy managed to become a prefect.

Fred and George are against any titles that recognize and praise good behavior at school. They always make fun of the elders, especially his brothers Percy and Ron. Despite the fact that some people may think that the Weasley twins are evil, in fact they do not want to cause harm with these jokes.

When the Weasley Twins become duplicates of Harry
“Well, none of us really dream about it, buddy. Imagine if something went wrong and we were forever a skinny, spotted jerk.”

When Harry needs to leave Private Drive, the Order of the Phoenix offers him a safe escape plan. Some members of the Order will drink a Polyjuice Potion and turn into Harry to confuse Voldemort and the Death Eaters. However, Harry is not too happy with this idea, as it puts his friends at mortal risk.

Fred and George are known for their cheeky comebacks, and this is one of their best performances. They will perfectly defuse a tense situation with their cheerful sense of humor. Although the comment did not amuse Harry, it made readers laugh.

In the first book, when the Weasley family overcomes the barriers between platforms nine and ten to get to platform nine and three quarters, Mrs. Weasley asks her son Fred to be next. In typical Fred fashion, he messes with her mother’s head and makes her believe that he is actually his twin brother George.