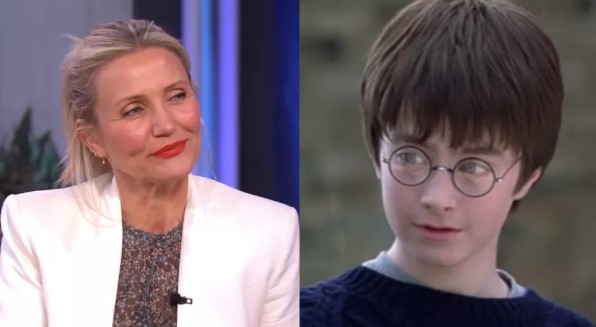 How did Cameron Diaz help Daniel Radcliffe in Quidditch scenes?

Tom Felton recently published his memoir “Beyond the Wand: The Magic and Mayhem of Growing Up a Wizard,” which focuses on his time on the set of “Harry Potter.” At the same time, the actor told some interesting behind-the-scenes moments that fans will want to know. When Felton revealed some BTS facts about Harry Potter and the Philosopher’s Stone, he talked about how Cameron Diaz unexpectedly helped his colleague Daniel Radcliffe in the iconic Quidditch scenes.

Given that there are no such things as a flying broom or quaffles, practical effects and green screens were needed to bring the magic sport to life. Tom Felton revealed in his memoirs (via Variety) that during the trial Daniel Radcliffe had a Cameron Diaz-focused subject that helped him complete his scenes:

When the first assistant director shouted “Dragon!” or “Bludger!”, you had to look at the tennis ball as if it was, well, a dragon or a bludger. it was very similar to the other one, after a while they gave us more individual objects to look at. We have chosen photos of something or someone who is dear to us. Daniel Radcliffe had a photo of a particularly beautiful Cameron Diaz.

Oh, 12-year-old Daniel Radcliffe was a little in love with Cameron Diaz! Fans will probably take this scene a little differently, as they now know what Radcliffe was actually looking at. It’s better than what Tom Felton used to get his attention — the image of a carp because of his love of fishing. Another interesting fact about Quidditch, which was shared by the Slytherin actor beloved by fans, is that the “broom” he used was a metal pole attached to a bicycle saddle. The actors were tied to a harness and had stirrups for their feet. The swing also moved the stars in different directions, and a fan blew in their faces to simulate the wind. After hearing all this, you really have to appreciate the magic of cinema.

However, there were obstacles. The director of The Philosopher’s Stone, Chris Columbus, said that he still reproaches himself for the effects used in that first film, and today he would have made a sports match differently. Well, he should forgive himself for that, given that the film was shot in the early 2000s. And the cast still played great throughout the movie. By this point, during the Quidditch scenes in The Chamber of Secrets, Severus Snape actor Alan Rickman had given Lucius Malfoy star Jason Isaac advice on how to respond convincingly to the match they were watching.

In addition to Quidditch, Tom Felton shared other juicy secrets on set in his book. For example, he spoke about his “unspoken love” for his partner in the film Emma Watson. (Watson actually had a bit of a crush on him during the second movie.) Although they didn’t have a close bond when they first met, they now have a great friendship. In fact, we should thank actress Hermione Granger for encouraging Felton to “tell his story.” The 35-year-old actor also spoke about his substance abuse and his stay in a rehabilitation center, which he tried to go through several times to gain sobriety. He also discussed the controversial Harry Potter author J.K. Rowling and how often she was on set.

After hearing that Cameron Diaz helped Daniel Radcliffe in his work, the question arises whether other child actors working on blockbusters have similar stories. It’s something to think about, and if they did, I’d hope they had as strong a visual signal as Diaz.

You can watch these Quidditch scenes by streaming Harry Potter movies with a Peacock subscription. Tom Felton’s memoir “Beyond the Wand: Magic and the Lawlessness of Growing Up a Wizard” has also gone on sale!