Home Entertainment Harry Potter: 9 more spells that should be banned 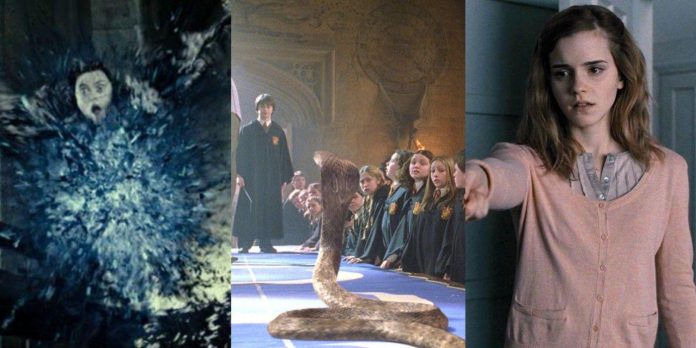 There are a range of illegal spells within the Harry Potter universe, and these are usually classed as unforgivable curses. However, outside of those enchantments, there are a variety of other spells that perhaps shouldn’t be allowed because of the damage they could do. They could easily cause harm or perhaps even be utilized to commit a crime.

There should perhaps be more stringent rules within the Wizarding World and while that wouldn’t make the saga very fun to watch, if there was a reality to the magic seen within the franchise, then the legality of these different curses and charms would surely be up for debate in the Ministry of Magic.

Diminuendo is a spell that many might not be familiar with however, it was practiced by Dumbledore’s Army against the Death Eater dummies that could be found in the Room of Requirement. The spell causes the victim to shrink to a tiny size.

RELATED: 10 Characters Who Made The Most Magical First Impressions In Harry Potter, According To Ranker

While that might be fine for inanimate objects, there’s no telling how that may impact a person. The biology of a human is not made to shrink to that size. What’s more, if someone was able to make the transition and was left like that, it could be incredibly dangerous. It would probably play out like Honey I Shrunk The Kids and should be made illegal.

Transfiguration is another spell that in theory is pretty harmless on inanimate objects. But there’s a slightly darker side to this spell that shouldn’t be overlooked. For instance, is it not animal cruelty to be able to turn any creature into a goblet or perhaps a feather?

What’s more, the magical school has equipped its students really to use this charm on anyone. Mad-Eye Moody demonstrated that he could turn any pupil into an animal, as he did to Draco, at will. There’s no way for the victim to transform back, which means they could be lost into the wilderness forever. Should that be allowed?

Accio is a pretty remarkable spell which means that an object can be summoned from anywhere. In theory that’s great for if someone loses their keys or perhaps needs quick access to something. But could it be used to steal objects from anyone in the world? Could wizards not simply summon cash for instance?

Even the least competent villains could probably use Accio to their advantage. While there perhaps should be some allowances for the spell, there needs to be a legal aspect explored about Accio that stops it from being used for more corrupt purposes than it was intended.

Serpensortia is not a commonly used spell, but it is one that even a young Harry Potter managed to master at Hogwarts. It should not be used around Muggles, who would not be able to combat a curse like this that could easily be weaponized.

Serpensortia allows the user to create a snake from the end of their wand. The serpent seems to be venomous although there’s no telling what range of snakes could be cast from the spell. Regardless, the potentially magical creature could be lethal to mankind and wizardkind alike.

Portkeys are so useful for being able to transport wizards anywhere in the world. But any object can be used to create a Portkey, which is where the difficulty lies. For Harry, he learned the consequences of taking hold of a Portkey in the Triwizard Cup and how it can be corrupted.

Portkeys could be planted for unexpecting victims, who will be transported to strange places. There should be a way to identify a Portkey, or some kind of way to register these devices, rather than allowing witches and wizards to use the spell at will.

It’s extremely common for Death Eaters to utilize the killing curse in their desire to rid the world of Mudbloods and Muggles. It was certainly a surprise to see Molly Weasley use her killing curse in her battle against Bellatrix though; one that hadn’t been seen before.

The spell is difficult to describe, but it was almost as if it shriveled her up before a final blast killed her for good. That spell has to be placed on the illegal list in the Ministry of Magic if it hasn’t already happened. Perhaps it’s a spell that Molly herself came up with!

Bombarda and Bombarda Maxima is essentially a spell designed to cause huge explosions. It’s powerful enough to blast through a strong wall, allowing the Room of Requirement to be discovered by Dolores Umbridge. It’s the wizard equivalent of setting off a bomb.

That spell surely should not be allowed for everyday use. It could genuinely be used by anyone to cause supreme structural damage and there’s no telling what the impact might be on a person if they were subjected to the charm. There has to be some policing or Auroring on this one.

Incendio is the kind of spell that could be used by any arsonist on a whim. It is a spell that allows the caster to create fire easily, although as Harry has demonstrated there is some practice needed to get to the kind of fireballs that Dumbledore can cast.

Should all that power be legal to use though? If the spell gets out of control, much like the use of Fiendfyre, then it could cause so much devastation in its wake. The only thing that acts as a counterargument to this is the fact that water can also be cast out of nowhere.

The impact of Obliviate has been demonstrated many times over throughout Harry Potter. It’s a spell that can wipe someone’s memory completely clean and was responsibly used by Hermoine on her parents to protect them. But is there ever a moral argument to use the charm?

Lockhart used Oblivate throughout his life to commit fraud before he had the spell turned on himself, sending him to the hospital forever. There has to be a law prohibiting the use of this spell, considering everyone has the right to their memories never being tampered with.

A fan of World of Warcraft recreated Stormwind in Minecraft