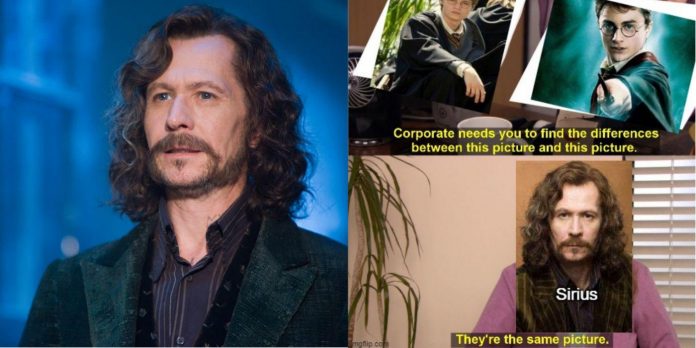 Gary Oldman recently appeared in the thriller Slow Horses, a TV show about spies streaming on Apple TV. However, people mostly remember this actor for embodying Harry Potter’s godfather, Sirius Black. His iconic portrayal of this beloved character earned him the unconditional love of the fandom.

Even though Sirius Black had his bad moments, he was a great father figure to Harry and an amazing character. The fans thoroughly love him and the Marauders, and they show their appreciation by creating some of the funniest memes in the Harry Potter fandom.

Turning Into A Dog On Command

Not only is Sirius Black one of the most brilliant wizards of his generation, but when he was a young student at Hogwarts, together with his friends, he managed to achieve one of the most complicated magical skills, turn himself into an Animagus.

Being an Animagus is one of the coolest things wizards can do in the magical world, and it’s extremely useful. Thanks to their Animagus forms, the Marauders could accompany Remus every full moon when he turned into a werewolf. Plus, Sirius could escape Azkaban undetected because Dementors can’t perceive animals.

Differentiating Between Harry and James

Sirius and James were the best of friends when they attended Hogwarts. James even accepted Sirius into his home when the latter couldn’t stand his family anymore. On top of that, James selected Sirius as his son’s godparent. So, when Voldemort kills James and Lily, and Peter frames Sirius for his murder, Sirius loses his freedom and his best friends on the same day.

Since it was very hard for Sirius to go through this mourning, he copes with it by projecting his friendship with James into Harry. He usually wants Harry to be as adventurous and daring as he and James were when they attended Hogwarts. However, Sirius is still a great godparent to Harry, supportive of all his choices, even if sometimes he has a hard time accepting he’s not his best friend.

In one of the saddest moments in the Harry Potter books and movies, Sirius falls through the veil in the Ministry of Magic and dies. However, this didn’t stop the fandom from making a hilarious meme about this moment using Sirius’ name to make an amazing pun.

Serious and Sirius are homonyms, which have been a source of amusement for people all over the internet. There are all kinds of puns around abusing this character’s name and last name. In this case, they even made a play of words with the “dead serious” expression and the fact that Sirius is, indeed, dead.

This is one of Sirius’s best quotes in the books. However, even though most of the time Sirius has the best advice, he has a hard time applying it when it comes to his family. Sirius grew up with an elite family from the magical world, who supported ideas about blood purity and the dark arts, for which he never felt comfortable with them, making him defensive about everything that has to do with the Blacks, including Kreacher.

When Sirius tells Harry these wise words, it’s hard not to take into account the way in which Sirius treats his house elf. Although Kreacher makes it hard to love him, Sirius doesn’t have to be so rude to the creature. Harry’s godfather should have listened to Hermione’s advice, and maybe the house elf wouldn’t have betrayed him.

Since Peter Pettigrew framed Sirius for his own death, Sirius had to escape Azkaban and spend his remaining years hiding from the Dementors. In the beginning, he visited different countries, and he even sent letters to Harry carried by the most exotic birds. Unfortunately, later he had to come back to England to help the Order of the Phoenix.

It wouldn’t be outside the realm of imagination to believe that Sirius spend a couple of months helping the muggle police. Sirius loves adventures and confronting bad guys, so the job would be perfect for him. Also, it would an easy way to make a living while outrunning the English Ministry of Magic.

Framed For Murder And Treason

Comparing Sirius’s situation with Among Us is simply hilarious. Just like in the game, when everyone finally realized that Sirius wasn’t “the impostor”, it was too late because Sirius was already dead. Unfortunately, the real impostor was Peter Pettigrew, and it could be said he definitely won that round.

His Name Is Also The Name Of A Star

Sirius is the star of the fandom’s heart, but his name is also a literal star. J.K. Rowling loves naming her characters after some of their particular quirks. So, Remus’s last name comes from the Latin word “lupinus” which means “of a wolf,” whereas Sirius is named after the star Alpha Canis Majoris, which, translated from the Latin, means “greater dog,” a clear allusion to his Animagus nature.

RELATED: 10 Memes That Sum Up Harry Potter And The Half-Blood Prince

Making puns with Sirius’s name it’s a long-standing tradition, but this one wins the prize. Not only do they make the association between Sirius’s name and the star’s designation, but also they take it a bit farther and caption the meme as “then you know you’re in SIRIUS trouble.”

A Group Of Uncontrollable Marauders

The Marauders were brilliant, but also incredibly destructive. Every older character in the Harry Potter books strongly emphasizes how out of control the Marauders were in their school years. Even if they became functional adults, they broke havoc during their teenagehood. However, Sirius and his friend grow up to be incredibly heroic, if a bit too attracted to dangerous situations.

Since there is no spin-off about this beloved group of characters, the fandom can only speculate about some of their adventures. It would be funny to see if Sirius and James were captured by muggle police in their Animagus form while doing something very illegal.

He Didn’t Get Enough Time With Harry

Since Harry lost his parents when he was only a baby and his aunt and uncle didn’t like him at all, for most of his life Harry didn’t have people he could call his family. However, when Sirius escapes Azkaban and tells Harry the truth, Harry finally finds a father figure. He was supportive of Harry’s choices and always tried to give him good advice, making Sirius one of the best characters in Harry Potter.

Unfortunately, Rowling loves nothing more than killing off characters that are closer to Harry, such as his parents, Sirius, Remus, and Dumbledore. Even Cedric made the mistake of getting into the Chosen One’s good side. It’s truly a surprise the Weasley family only lost Fred.

He Was Unfairly Judged

One of the biggest criticisms of the Harry Potter books is how easily things could have been solved if they only used their magical items. If Sirius had taken the Veritaserum, they would have realized he didn’t commit any crime, so Sirius would have been able to raise Harry, and Harry would have been a happy child.

However, this turn of events would have taken away some of the most important parts of the story. Perhaps, Rowling should have thought about it twice before introducing the Veritaserum, a potion so powerful that it can create plotholes in any part of the story that could be solved with a character telling the truth.

Wolverine May Have Just Entered the MCU Via the Hulk Woman...