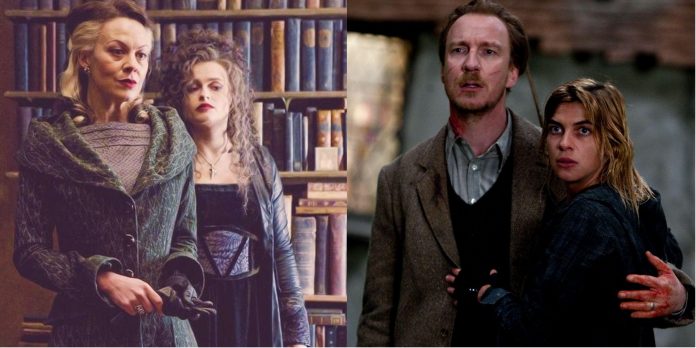 The Harry Potter movies feature many iconic duos but some of the best are the ones that don’t get as much screentime as they deserve. Some of these character duos are romantic couples like Lupin and Tonks, while others are siblings such as Bellatrix Lestrange and Narcissa Malfoy and some are friendships like with Luna Lovegood and Ginny Weasley.

While these relationships do feature in the movies, they are often sidelined or overlooked in favor of more prominent duos. Some of these lesser featured duos certainly deserved more screentime in the Harry Potter movies.

Seamus and Dean are two of Harry’s classmates at Hogwarts and also stay in the Gryffindor Common Room. While the friendship between their roommates, Harry and Ron is heavily featured in the movies, Seamus and Dean are often in the background.

Despite them not receiving that much screentime, the movies do establish that the two boys are close friends. Dean supports Seamus when he argues with Harry over his doubts regarding Voldemort’s return in the fifth movie. With them sharing a dormitory with the series’ main character and both being members of Dumbledore’s Army, it’s a shame their friendship isn’t seen more within the movies.

Bellatrix is one of the most evil Death Eaters from Harry Potter and she’s arguably Voldemort’s most loyal follower. She proves her loyalty to him in taking out several of his enemies including her own cousin, Sirius Black. The servant and master are shown together several times towards the end of the series; however, their interactions are limited due to being the villains of the story.

Bellatrix’s unshakable devotion to Lord Voldemort is one of the most interesting dynamics so it would be captivating to see it explored further. Although it’s barely explored in the books either, many fans would love to learn more about how she became such a high-ranking Death Eater.

Draco has numerous scenes with his father, Lucius in the movies which helps viewers understand how he became so cruel and spoiled. That being said, his mother is only introduced in the sixth movie so not as much time is spent on their relationship.

Narcissa goes to great lengths to ensure Draco’s safety in the sixth movie so it’s clear she is devoted to her son. The love she has for her son is ultimately what saves Harry’s life in the final movie when she lies to Voldemort and tells him he’s dead. More prior scenes between Narcissa and Draco would have made this surprising act of compassion even more satisfying though.

In the penultimate Harry Potter movie, Ron’s brother Bill marries former Triwizard Champion, Fleur. However, the celebrations are ambushed by Death Eaters and the golden trio is forced to flee.

Movie fans never get to see how the relationship between Bill and Fleur actually began and they already appear to be a couple when they’re first seen together. The books also show Mrs. Weasley’s disdain for Fleur when she begins dating Bill which would have led to some great comedic scenes in the movies. As their wedding is such an important scene, it’s odd that the movies never show Bill and Fleur’s first meeting or even explain how they got together.

A lot of things are still unknown about the Black family which sisters, Bellatrix and Narcissa belong to. While Bellatrix is chaotic and unhinged in nature, Narcissa is more calm and collected and sides with Voldemort more out of obligation and self-preservation.

The sisters are first seen together in the movies when they visit Snape’s house in an attempt to secure Draco’s safety after he is enlisted to murder Dumbledore. Although the differences between the two are clear to see, the true complexities of their dynamic are never really touched upon. Seeing more of the two sisters together would have enhanced both characters and highlighted their different levels of loyalty to the Dark Lord.

Despite having completely different personalities, Luna and Ginny form a strong friendship in the books and are in the same year at Hogwarts. The two girls and Neville are the only Dumbledore’s Army members to join the golden trio in their journey to the ministry to save Sirius in the fifth movie.

Dumbledore and Hagrid are trusted allies and firm friends, both being key in getting Harry to safety at the beginning of the series. Hagrid trusts Dumbledore so much that he becomes furious when anyone insults him as seen with Mr. Dursley. Also, Dumbledore remains firmly on Hagrid’s side when he is accused of opening the Chamber of Secrets.

That being said, the later movies sideline the Hogwarts teachers’ friendship and Hagrid’s reaction to Dumbledore’s death receives no more focus than any other character’s. As the two wizards are both key role models to Harry, it’s disappointing that their friendship is pushed into the background in the later movies.

Sirius and Lupin have one of the best friendships in Harry Potter and have been causing mischief since they were at Hogwarts together, That being said, after the third movie it would be easy for viewers to forget their friendship as it receives very little focus later on.

It’s significant that Lupin is the one who holds Harry back after Sirius is killed during the battle at The Department of Mysteries and is a touching reminder of the men’s friendship. However, it seems like a wasted opportunity that Lupin’s own pain regarding the death is never explored and is barely even hinted at in the following movies. Having a scene between Sirius and Lupin together prior to the former’s death and showing the latter’s grief afterward would help to reflect the strong friendship fans know from the books.

Dumbledore and McGonagall have been colleagues at Hogwarts for many years and have become firm friends in this time. She watches the Dursleys prior to baby Harry’s arrival at Privet Drive which shows just how much Dumbledore trusts her.

While the earlier days of their friendship are being explored in the Fantastic Beasts series, fans would have enjoyed seeing more scenes of them together in the original movies. McGonagall and Dumbledore attend the Yule Ball together and she is one of his greatest defenders when Umbridge arrives at Hogwarts. Although the movies show that Dumbledore trusts McGonagall completely, fans don’t get to see much of their friendship.

Lupin and Tonks are one of the best couples in Harry Potter but their relationship is sidelined in the movies. Much like with Bill and Fleur, movie fans never see how the relationship begins and the couple are simply together in the sixth movie without any explanation.

As Harry becomes the godfather of the couple’s son in the books it’s disappointing their relationship isn’t featured more heavily in the movies. Lupin and Tonks’ tragic deaths in the final movie mirror Harry’s own parents’ deaths and bring the story full circle so it’s strange that this is mostly brushed over. Both the characters are fan favorites and their relationship is an important story element in the books; including them more in the movies would have allowed their eventual deaths to create a larger impact.