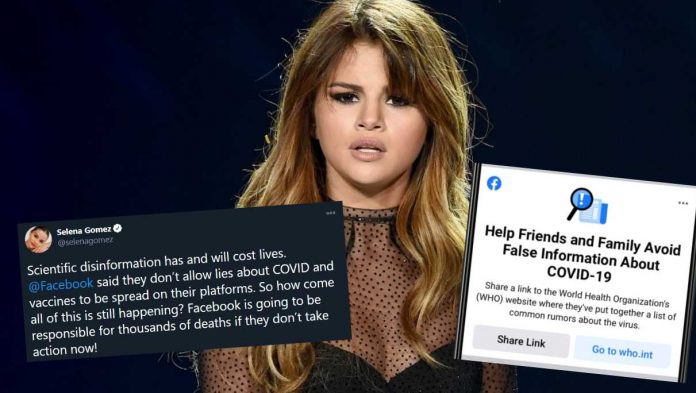 Selena Gomez criticized Facebook’s policy against fake COVID-19 information and conspiracy theories about vaccines, and said she would be responsible for the deaths of thousands of people if she didn’t act immediately.

The world-famous actress and singer Selena Gomez lashed out on Facebook via Twitter. Commenting on a video of an interview with Imi Ahmed, CEO of the BBC News Center for Combating Digital Hate, Gomez shared a long tweet and stated that Facebook is responsible for thousands of deaths.

“Scientific disinformation costs lives and will cost (also in the future), in the tweet that Selena Gomez shared. Facebook says it does not allow lies about COVID and its vaccines to spread on their platform. So how can all this still happen? If Facebook doesn’t act immediately, it will be responsible for thousands of deaths. ” used the expressions.

Stating that they removed the ads of fake information about vaccines verified by the World Health Organization and the US Centers for Disease Control and Prevention, the Facebook spokesperson stated that they tagged Facebook pages and groups that share false information about vaccines, that the content of this page or groups did not fall on the home page and did not recommend it to users.

However, this “COVID” outburst was not Selena Gomez’s first reaction to Facebook. The famous singer quoted the tweet on Instagram at the beginning of last December that some Neo-Nazi-themed racist products were not removed from the sale despite Facebook being informed, “I cannot find words to say. Facebook and Instagram, how do you tolerate this hate? Despite being reported, these accounts still remain. ” he used the expressions.