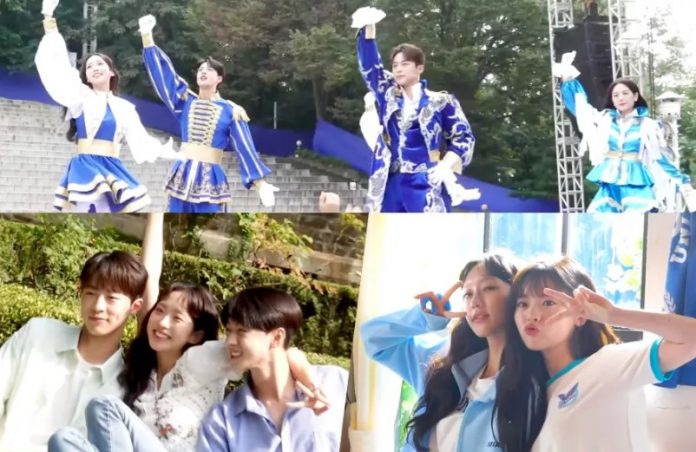 The mysterious SBS romantic comedy “Cheer Up” tells the story of a group of college students who immerse themselves in a story of passion after joining Teja, their school’s support group, which turns into ruins after leaving their glory days behind. The drama stars Han Ji Hyun, Pae In Hyuk, Kim Hyun Jin, Jang Gyuri, Lee Eun Sam and others as members of Theia.

At the beginning of the new video, Han Ji Hyun vigorously shows off his Theia uniform, posing in various support formations. After that, she returns to her casual clothes and takes cute trio photos with Bae In Hyuk and Kim Hyun Jin.

Han Ji Hyun comments, “The concepts we shot today were harmoniously shot with Song Ho [Kim Hyun Jin] and Jung Woo [Bae In Hyuk], and I was filming my [choreographic] practice. And also, in my incredibly cool form, we filmed an incendiary dance with everyone.” Bae In Hyuk added that the shooting of the poster focused on an energetic and refreshing concept, as well as the fiery passion of the support group.

The trio then gets together with the rest of the Teja to take touching group photos in matching sportswear.

Pae In Hyuk and Han Ji Hyun talk about how the actors and crew are diligently filming in hot weather, before the latter adds that they shot very beautifully and beautifully, despite all the sweat. Pae In Hyuk shares, “No matter how hard we fight, I believe that a video will come out that will show how hard we worked. I hope you will watch us beautifully and have fun.”

Better Call Saul Season 6: What we still have to see...