Home Celebrity HALSEY AND SUGA WILL LAUNCH A COLLABORATION 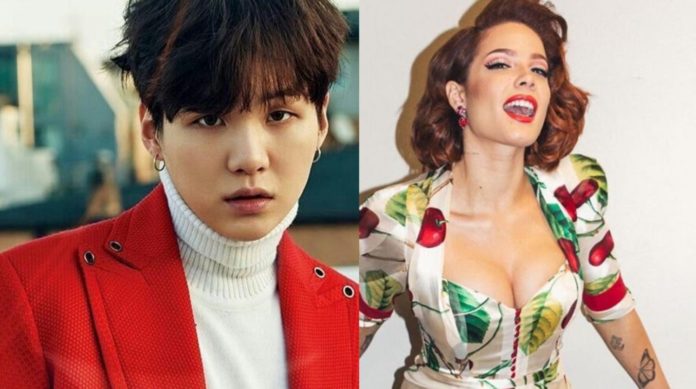 The clues about the expected BTS comeback have made a lot of noise lately; some tracks have already been leaked as the possible name of his next album and a video that revealed a fragment of his new song.

However, Bangtan boys are also working on their solo projects. One of them is Suga, who announced that he was preparing his new mixtape. And that’s not all! A few minutes ago, Halsey confirmed that she has also worked alongside Yoongi and is about to launch a collaboration.

Through his Instagram account, Halsey shared a video showing the list of songs from his third album ‘Manic’, which will include his most recent hits ‘Graveyard’ and ‘Without Me’. However, what caught the attention was that the song number 13 of his new album was titled as ‘Suga’s Interlude’.

Rumors about a possible collaboration with Suga began to emerge immediately, especially when fans noticed that Halsey had tagged BTS in his post. Later, the singer made a live broadcast on Instagram where she clarified this situation and confirmed that she is about to release a song with Suga. Wow!

Halsey confirmed that one of the artists with whom he collaborated on his new album is Suga, whom he regards as a great musician. The singer is sure that the vibes and the theme of her album fit perfectly with Yoongi, that’s why she didn’t hesitate for a second to work with him.

Halsey’s new album, ‘Manic’, will be released on February 17, 2020, so very soon we will have the opportunity to listen to the song that she and Suga prepared. Yaay!

BTS crowns as Spotify’s most listened to K-pop group