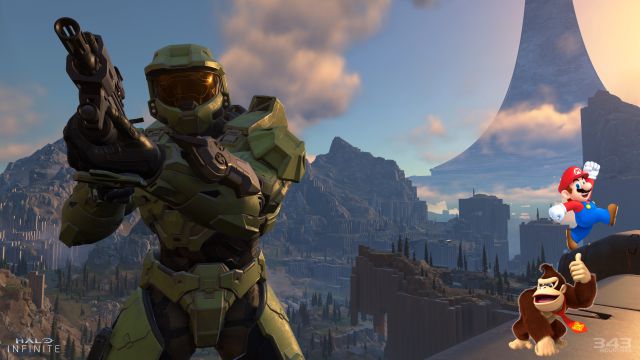 Halo Infinite: Mario, Bowser, Donkey Kong and company are portrayed as characters from the Halo universe, armed to the teeth.No, the Master Chief is not yet present in Super Smash Bros. Ultimate and it has not been announced that it will happen, but the imagination is a powerful tool that can be projected into more tangible realities, such as the drawing of the user pikathorchu that has shared Halo’s official Instagram account. The saga, in the hands of 343 Industries, is still waiting to release Halo Infinite, but in the meantime, it is time to imagine Nintendo characters portrayed as if they were the protagonists of Microsoft’s galactic saga.

As can be seen in the illustration, which you can taste just below these lines, Super Mario appears as the Master Chief, with a cap that simulates the helmet of the protagonist of this science fiction saga. Bowser, as the antagonist, and Princess Peach (Cortana), kidnapped as always, appear accompanied by Donkey Kong and a Koopa, all of them equipped with weapons very different from those they usually carry in the Mushroom Kingdom. “The adventures of Chief Mario and Peachtana, eh?”, Publishes the account with a thoughtful smiley.

The long-awaited new installment of the game developed by 343 Industries was scheduled for last year, just when the next-generation consoles were marketed. However, the studio announced that there would not be time for the launch of Xbox Series X and Xbox Series S, so they decided to delay it until the following year to polish the gaming experience. The truth is that the players reacted with some coldness when the campaign was shown. On the other hand, the multiplayer mode will be free-to-play, as confirmed by Microsoft itself.

Halo Infinite will go on sale on PC, Xbox One, Xbox Series X, Xbox Series S, and Xbox Game Pass in 2021. Although there is still no more specific date, a voice actor for the video game slipped that the date points to November.