Home Entertainment Halo Infinite, GOTY 2021 For The Public; Wins Player’s Voice At The... 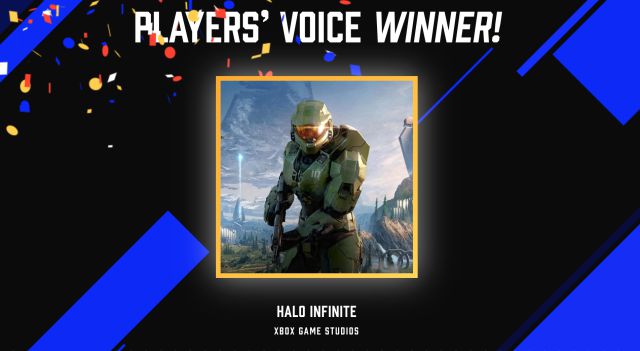 Halo Infinite: The 343 Industries title emerged victorious from fan voting after a voting process that began with a total of 30 titles. Halo Infinite has been chosen Game of the Year for the public in The Game Awards 2021. The recently published title of 343 Industries and Xbox Game Studios has not entered the list of nominees for the TGA 2021 because of its release date, but it did in the candidate list of the so-called Player’s Voice, which in 2020 won Ghost of Tsushima. The Master Chief has burst through the front door after a long wait.

The Player’s Voice award at The Game Awards consists of a process in which only fans take part; Unlike the rest of the categories, in which 90% of the final result comes from the votes of the specialized media, while the public represents the remaining 10%.

The voting for this award is divided into three rounds: the first began on December 2 with 30 candidates. In that list you had to vote 10. On December 5 was round two with the 10 remaining candidates; of which you had to choose 5 titles. Finally, between December 7 and 8, the winner was chosen, which was Halo Infinite. The rest of the final contenders were Forza Horizon 5, It Takes Two, Metroid Dread, and Resident Evil Village.

Despite its complicated development, Halo Infinite has managed to go on sale that year 2021 both with its multiplayer mode and with the campaign, which is one of the great events at the narrative level of the series by serving as a continuation of the Halo story. 5: Guardians. In our review we have rated it 9 out of 10: it is an excellent video game. The seasons will last six months from now; It won’t be until Season 2 and 3 when Co-op and Forge modes arrive.

Halo Infinite is now available worldwide for Xbox One, Xbox Series, and Windows 10 PC; also already for our enjoyment in Xbox Game Pass. You can read our analysis with note here.

Serena Williams announces retirement from tennis: “I need to move on”