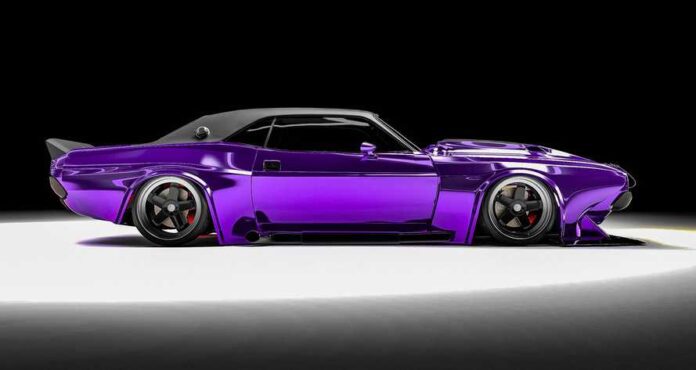 Developed by Hemi Autoworks and Ellsworth Racing, Highway Star is one of the highly anticipated vehicles of the 2020 SEMA fair to be held in Las Vegas. The engine that powers Highway Star is the Hellcat V8.

What would happen if the tubular chassis of the Dodge Viper and the body of the 1970 Dodge Challenger combined with the Hellcat engine? The new car, designed by Hemi Autoworks and Ellsworth Racing, was named Highway Star, inspired by the song of the famous rock band Deep Purple in 1972. Highway Star will be one of the highly anticipated vehicles of the traditional SEMA auto show planned to be held in Las Vegas this year.

The engine of the car appeared as a 6.2-liter Hellcat V8 with a super charge. The supercharging system was purchased from Kong Performance and the heat blocking ring FI Interchillers. The chassis had to stretch 13 inches (33 centimeters) to be fully compatible with the body. The body has also been expanded by 1.5 inches (3.8 centimeters) compared to 1970 Challenger. With larger volumes of fenders, the width will have increased by a total of 4 inches (10.1 centimeters).

Hemi Autoworks and Ellsworth Racing worked with a number of partners:

Hemi Autoworks and Ellsworth Racing are Ron Francis Wiring on electrical installation to improve Highway Star, and Pareto Point Inc. on complementary filtering system. worked with. Among the other companies that help the Highway Star project are; hoses and fuel pipes, the power steering system and the super charge cooler include Hot Rod Fuel Hose, while the light shield features Racing Shields. Vinyl flooring and a number of other design elements were provided by YearOne.

The car’s brakes, spring dampers and coolants; Developed with the help of Complete Performance Motorsports. The Highway Star’s engine, which has 19-inch Viper tires, transmits its power through the three-disc Mantic clutch and the Viper gearbox.

The people behind the Highway Star project state that they do not want the car to be limited to SEMA, but the process continues for a real street racing car. For this, the completed car is planned to participate in national car races.

What do we want in WhatsApp: Telegram voice chats

7 important tactics to follow when an imposter Among Us