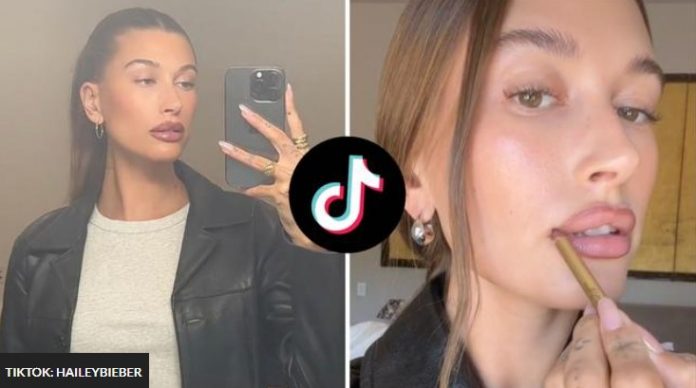 Earlier this month, Hailey shared her fall makeup on TikTok with the caption: “Ready for all the fall stuff, including glazed brownie lips.”

In the video, which has gained more than 3.2 million views, you can see a model with glossy lip makeup created using a brown lip pencil on her upper and lower lip lines and applying transparent lip gloss all over her lip.

She also posted an instructional video on how to create a fashionable image, which went viral and gained more than 15.7 million views.

Initially, fans liked the look, and many TikTok users shared their own videos recreating the “glazed brownie lips”, paying tribute to Hailey. However, now the 25-year-old is accused of “cultural appropriation”.

While Hailey didn’t claim to have invented this effect, she also didn’t mention that women of color have looked the same for over 20 years.

As a result, many people took to social media to urge her to “culturally appropriate” makeup techniques without specifying the source of inspiration for the image.

In a clip that has racked up more than 2.7 million views, TikToker “Benulus” revealed that she constantly receives negative comments about her shiny brown lip before targeting Hailey.

“Y’all sh*t on my lips every single time I post. But a white woman does it, it’s gonna become a trend,” she said.

“Yeah, I’m so flattered that Hailey Bieber always gets inspired by my community, by the POC community, but it just irks me that because she’s done it now, it’s gonna become so trendy.”

“This is innovative,” she joked, casting a shadow on Hailey, not mentioning her name, but at the same time clearly expressing her attitude to this trend.

“Okay, what’s the name of the Latin American woman you saw with this lip combination?” one of the commentators asked. “Because it’s been in fashion since the 90s, lol.”

“It was a chola lipstick in the 90s,” says another comment. “I like the look of chicana.”

“Laughing in Spanish,” one user joked, while another joked: “Absolutely not cultural appropriation.”

Other critics highlighted the fact that the branding of the “glazed brownie lips” image was problematic because the video was made to help sell Hailey’s products, meaning she was partly cashing in on a trend created by women of color.

At the moment, Hailey has not yet deleted the TikTok video from her account and has not responded to the accusations of cultural appropriation.

Lisa and Seunghoon have quite a story behind their video dancing...