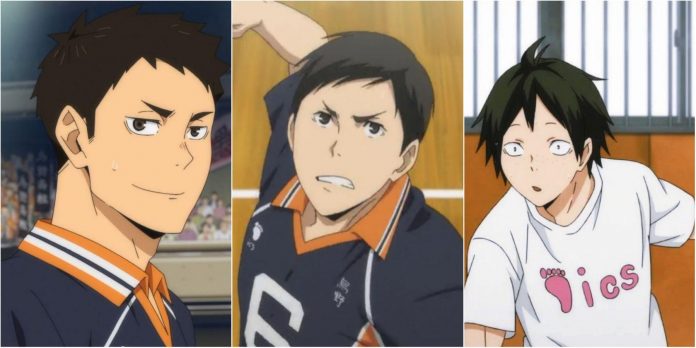 The journey of the Karasuno volleyball team has been a battle of blood, sweat and tears. From great losses to even greater victories, these boys have had quite the upward trajectory in their quest to reach Nationals. Through unwavering grit and sheer determination to restore their team’s glory days, the former “wingless crows” have blossomed into fierce competitors on the court.

This would not be possible without the stellar leadership of their captain, Daichi Sawamura. As the manga continues, even future captains Ennoshita and Tadashi show their own leadership styles to guide their own respective teams.

RELATED: Kuroko’s Basketball vs. Haikyuu!!: Which Is the Better Sports Anime?

Daichi is the current captain of the Karasuno volleyball team. He is a third year alongside the Vice Captain Kōshi Sugawara, Ace Asahi Azumane and Team Manager Kiyoko Shimizu. This year marks their last year as volleyball club members.

Just like Hinata, Daichi joined Karasuno High because he saw how well their volleyball team performed at Nationals. His upperclassmen noticed a determination in him. Even as a first year, Daichi firmly believed that Karasuno stood a chance to succeed in volleyball, no matter how slim. It did not matter to him that other schools refused practice matches with them because they felt that it would be a waste of time. This attitude would rub off on his fellow first year students Suga and Asahi. As a trio, they would practice after hours to become the best representatives of their school. Now, as a captain two years later, Daichi’s infectious enthusiasm has spread throughout his team.

As a leader, Daichi is patient and calm. However, he can be stern when he needs to be and even possesses an angry streak. Daichi does not do the bare minimum to ensure the success of his team. He cares deeply that Karasuno can fly high like the strong competitors they once were. He wholeheartedly believes in his teammates, and never shies away from uplifting them or giving them a reality check. In a way, his drive to reach Nationals matches Hinata. They both want the team to succeed, but as the captain, Daichi ensures that all his players remain as motivated as he is.

Karasuno’s place at Nationals has been rightfully earned by all the players, but perhaps especially Daichi. While the team have particularly spirited members like Hinata and Kageyama, the captain’s energy makes all the difference. All of his hard work and motivation has not been fruitless. His consistent leadership even in the most hopeless of times proved to be effective, for now Karasuno stands again where they stood before once upon a time.

After high school, Daichi becomes a police officer for the Miyagi Prefecture Police Force in the Community Safety division. His stern constitution and disciplined nature definitely suit him well for this profession.

Karasuno’s number 6 player is Chikara Ennoshita. His position is substitute wing spiker. A man of few words, Ennoshita is collected, cool and has shown the ability to keep the team together in a crisis.

In season 2 of the anime, Ennoshita showed promise as a great captain when Daichi was heavily injured after colliding head-first with Tanaka. There was speculation over who would take his place, but to the spectators’ surprise, it was Ennoshita who came forward. Suga described him as the only one who can replace Daichi, already hinting at the next captain of Karasuno’s volleyball team. Ennoshita is not part of the starting line up so he is not exactly a well-known face, some spectators didn’t even remember him.

RELATED: Haikyuu!!: How Kageyama has Changed Since Season 1?

Those who know Ennoshita call him the “don” of the second years. He gives off a timid first impression, but he knows how to handle the rowdier second years like Tanaka and Nishinoya. Even the first years respect him more now. Tanaka called him the “captain stand-in”, which is the perfect adjective for Ennoshita. Despite his nerves, he stepped up to the court and gained his confidence to motivate and lead his team. He pulled himself together, quit making excuses and simply played a damn good game.

Something that haunts Ennoshita’s time at the volleyball club is when he “ran away”. When the former legendary Coach Ukai left Karasuno, Ennoshita began skipping volleyball practice along with five other students because he could not keep up with the tough training regimen. He felt incredibly guilty over bunking practice sessions, claiming it felt worse than actually practicing. His strong will brought him back to volleyball, and for the better. Ennoshita has really gotten to know his team very well. He understands all kinds of personality types, something Tanaka points out to him. This is the first of many steps towards his captaincy in the future.

In his third year, Ennoshita becomes captain of the volleyball team. Under his leadership, Karasuno lost the quarter finals at their first Spring Interhigh. At Interhigh Preliminaries, Karasuno played and lost to Date Tech High. During the fall they qualified for the Spring Tournament, where they played Inarizaki again in the third round; they just came up short against them.

Tadashi plays the position of middle blocker for Karasuno. He is also their pinch server, who performs the difficult Jump Float Serve. Tadashi has not had a lot of game time in real matches, but his tenacity against his nerves prevails. A shy person by nature, volleyball forces Tadashi to grow into a more confident and skilled player dubbed as the “Spear of Karasuno”.

As a little boy, Tadashi was bullied for his freckles and small build, until Tsukishima unintentionally saved him. Tadashi naturally latched on to Tsuki during high school, his quiet nature not really allowing him to be the most social. The two eventually became friends and joined the volleyball club together. He comes out of his shell eventually, thanks to volleyball.

Out of all the first years, Tadashi is the only one who is not in the starting line up. He wants to be as useful and skilled as his peers. He takes it upon himself to learn new moves from Shimada, a member of the Neighborhood Society volleyball team. Under his guidance, Tadashi learns to calm himself down in the face of a real game. He is gradually blossoming further away from the player who used to be spooked by the whistle blowing at the start of a new round. Not only has he grown as a player, but also as a person, standing up for himself against strangers and friends.

After Ennoshita, Tadashi becomes captain of the volleyball team. This may seem like a surprising choice, but Tadashi earns it. He is not as outspoken as Daichi or has the people skills of Ennoshita, but the anime has yet to reveal his own unique leadership qualities. During his captaincy, Karasuno became the third best team in the nation at Nationals. They made it to the semi-finals and played on the centre court, only to lose to the Itachiyama team.

The 20 Best Bob’s Burgers Episodes of All Time