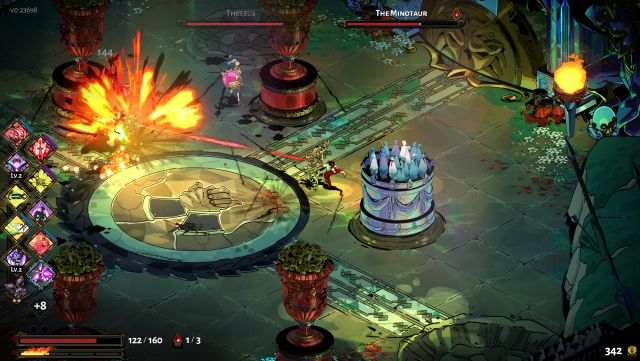 Hades: Supergiant Games’ celebrated roguelike finally arrives on PlayStation and Xbox consoles, treasuring the same quality and freshness of almost a year ago. There is no doubt that the roguelike has come to stay thanks to authentic games such as Dead Cells, The Binding of Isaac, Spelunky, Slay the Spire or Loop Hero, among many others, which have consolidated a very special way of understanding the video game and enhancing aspects like pure gameplay and progression. And in this Supergiant Games has a lot to say, authors of such prominent titles as Bastion, Transistor or Pyre, and that almost a year ago they surprised with Hades for PC and Nintendo Switch (after a long period of early access), a new twist nut to the genre that did many of the things that define roguelike very well, and that now finally reaches more platforms, such as current and previous PlayStation and Xbox consoles. Let’s see how the port to PS4, PS5, Xbox One, and Xbox Series X | S has sat for Hades in our review.

Escape from the underworld in key dungeon crawler

As the most hardened in the genre will know, Hades puts us in the shoes of Zagreus, son of Hades and immortal prince of the underworld, whose only and most desired objective is to escape from the clutches of the god of the dead and his dismal home, in order to do so. try to reach Mount Olympus. For this, it will have the advice of several gods of Greek mythology, such as Zeus, Athena, Artemis or Poseidon, who will contribute one of the differentiating aspects of the title within its genre: a kind of narrative thread that suits the development wonderfully of adventure, as we say, in the key of dungeon crawler. It is not for less, since the support of the string of characters helps to package the story, all with perfectly localized texts in Spanish with voices in English.

Although the true focus of Hades is its gameplay and how it approaches its development as a roguelike, a formula that remains intact compared to the original version and that is as addictive as it is satisfactory, especially in the field of the sensations at the controls and the character evolution. The games have a clear common nexus that is none other than death; because yes, in Hades we will die a lot, almost without rest, propitiating new attempts or runs after applying the corresponding improvements and what we learned in previous raids, all through the different randomly generated rooms that make up the particular hell of Hades.

Its development does not hide much mystery, since it offers everything that can be expected of a classic roguelike, that is, we will go from room to room after cleaning each of them of enemies, thus achieving all kinds of rewards that will serve so that, together to our learning at the controls, we can go a little further each time. Special mention for the great variety of enemies and their different attack patterns, an essential element in a title that bets on the constant repetition of situations. The videogame itself, and how could it be otherwise with a direct port, remains intact; and it is that Hades continues to maintain the freshness of a year ago, positioning itself as one of the best valued exponents of the genre of him.

Big Brother: Why players should never voluntarily enter the court