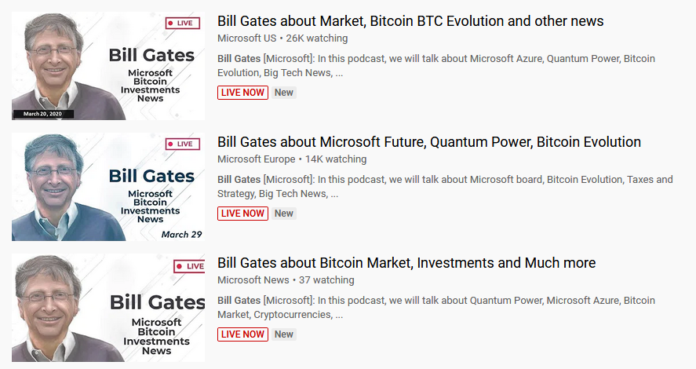 A hacker got Microsoft’s YouTube accounts and advertised the crypto money Ponzi system. This ad was published one after the other from the company’s accounts.

Cryptocurrencies are among the recent favorites of fraudsters. Cryptocurrencies, which are almost impossible to follow and used by many to save their savings, also attract many criminals.

One of these moves is targeting Microsoft. In the broadcasts that started about 14 hours ago, the hackers who shared the advertisement of a kind of Ponzi system live from their official Microsoft YouTube accounts.

Ponzi system in live broadcast:
The title of the live broadcast using an old video of Microsoft founder Bill Gates is “Bitcoin Market, Investments and Much more”. While there is a QR code on the screen, it is said that a higher amount of reimbursement will be made according to the amount of Bitcoin they send to the audience.

The Ponzi system is known as a frequently used fraud method. In this method, money is paid to the participants to build trust in the people for a certain period of time. After one point, the money deposited by the participants does not correspond. In our country, the emphasis of Çiftlik Bank can be shown as one of the latest and most popular examples of this method.

Publications continue as soon as this news is written. Although YouTube moderators are informed about the attack, no solution has been produced. This causes people to get confused.

Images from an old speech:
Bill Gates’ speech used in the publication is an old speech of Gates. Gates made this speech in June 2019 against entrepreneurs at Village Global. Those images keep turning in this post.

Currently broadcasting on YouTube from Microsoft US, Microsoft Europe, Microsoft News and other channels continues. The total number of publications has reached 19. While some of the channels are official Microsoft channels, some are other accounts that have been hijacked and renamed.

Microsoft is not the only company targeting such attacks. Names of people like Elon Musk were used in such cases before. Germany-based hacker group The Chaos Computer Club has also announced that it has been infiltrated and such a message has been published.

How much electricity do the chargers plugged into the socket consume?