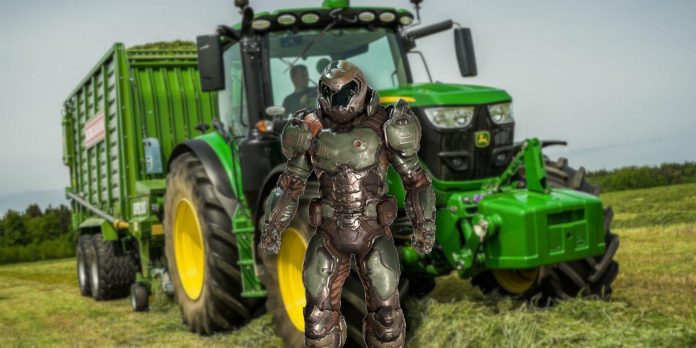 After its release in 1993, probably no one suspected what impact the original Doom would have on the industry. Along with Wolfenstein 3D, it marked the beginning of the genre of first-person shooters and still influences it. The fact that Steam has now simplified id Software’s classic games to packages shows that early Doomslayer projects are still very popular. Perhaps what keeps the beloved FPS in the spotlight is not only its timeless gameplay or endless mods, but also the many ways people can port and play it.

As a recent example, let’s take hacker disease codes. According to Wired, this Australian programmer managed to hack the computer system of the John Deere tractor, which now allows farmers to modify their own equipment. The demonstration at DefCon in Las Vegas last weekend not only brought the debate about the consumer’s right to repair their purchases to the forefront again, but it also looks like Sick Code did what everyone else did, hacking something. They installed Doom on it. An image posted on Reddit shows the game on a tractor display.

John Deere tractors are featured in Farming Simulator games and are one of the most famous brands of agricultural machinery in the world. However, most probably won’t find them suitable for launching an influential shooter from id. However, as many have demonstrated for almost 30 years, it is quite possible to make the original Doom work on almost anything.

There were so many strange and wonderful devices that Doom was ported to. Examples include a treadmill, a smartwatch, an electronic cigarette, an iPod Mini, and a touchpad on a MacBook Pro. There was even a case when someone moved the game to Doom itself, and someone managed to add it to Minecraft. Obviously, there is something about the iconic FPS that makes it ideal for installation on any number of things not officially intended. This begs the question of what else people will port it to in the future.

As for the game itself, it took the id Software team many attempts before they eventually had an impact on the games. In fact, John Romero said that Doom was his 90th game, and he had already spent many years working before helping to launch the ball in the genre of first-person shooters. Here you should learn a lesson about how new developers should not give up their dreams.

Doom was released in December 1993 for several platforms and has been ported to many systems.

The Nintendo Cinematic universe is meaningless: There is already a better...

Windows 11: Check Out The Top 5 Updates