Home Entertainment Gyoubu Oniwa is a brilliant boss Battle that Sekiro Has Been Presenting... 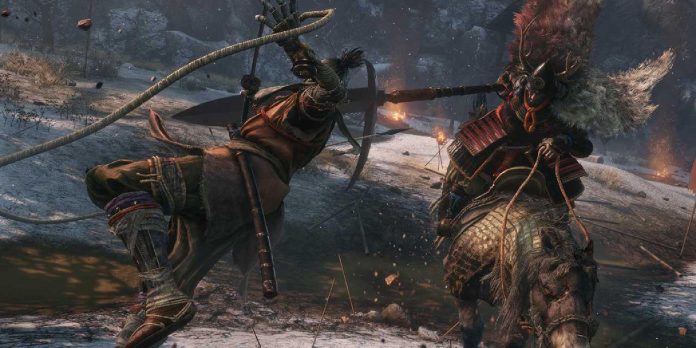 The first boss after the training area is an important milestone in any game, and the FromSoftware developer often succeeds in developing these introductory bosses. However, the first real boss of Sekiro: Shadows Die Twice both succeeds and fails in this regard. This is mainly due to the large gap between the first receipt of the prosthetic arm of Sekiro after training and the battle with the first boss.

Most players will not forget their first encounter with Gebu Oniwa, the first real boss of Sekiro: Shadows Die Twice. With such a bombastic introduction and an exciting fight when the boss fights on horseback, there are many things that can impress Geba. Unfortunately, the bombast and smooth combat are still overshadowed by the length of the open area of the Outskirts of Ashin.

Considering that FromSoftware has confronted players with horrors and spectacles from a nightmarish alien to a literal Dragon God, it really makes sense to say that Gyoubu has the most frightening introduction from the developer catalog. Breaking out at the entrance to Asin’s Castle, one of the best places of FromSoftware, Gebu starts a fight, shouting his name so that everyone who waves the Asin banner can hear him. Love or hate the boss, or even Sekiro’s unique approach to combat in general, this could easily rank among the best and most impressive representations of battles in the Soulsborne series. This includes Penetrator from Demon’s Souls and Moon Presence from Bloodborne.

After an impressive introduction, Gebu also offers a fresh look at the fight with many standard enemies and mini-bosses who have passed it. To keep up with the fast pace of the Gebu, it requires proper use of the hook and the ability to react quickly to the onslaught of attacks that come almost out of sight. This is one of the best examples of how Sekiro’s design can outperform other FromSoftware games, even if the difficulty may become an early wall for some players.

Given how Sekiro was trying to get a much more narrative experience, it was important to make the bosses feel like a real part of the world. Although not every boss is the best example of Soulsborne boss design, Gebu is no less important for getting to know the basics of the game than a training battle with Genichiro. At the same time, this wonderful introduction is not without drawbacks, primarily due to how long it takes Sekiro to introduce the first big boss.

RELATED: Should Sekiro: Shadows Die Twice get a sequel?

A long walk through the outskirts of Asin

The main bosses in Sekiro are easy to distinguish from mini-bosses, not only because they are much more difficult, but also because memories fall out of them. This is what allows the player to increase their strength, which makes Hebe Oniwa a particularly important milestone, as he is the first boss to unlock this ability to increase damage from the attacks of the main character Wolf. It is this importance that makes the time it takes to reach Gebu so detrimental to the initial development of the game.

By the time they get to Gebu Oniwa, most players will have already killed three mini-bosses, two generals, and the infamous Chain Ogre. Facing so many fights that don’t actually get the “main boss” treatment so early gives the impression that these integral parts of the FromSoftware formula won’t actually be a major part of Sekiro: Shadows Die Twice. Given that there are actually more than a dozen boss battles in the game, this early impression that the main bosses are few and far between is misleading and slows down the rate of appearance of these types of enemies.

There are a lot of things in Sekiro’s smooth combat that can easily attract players to hike in places like Asina Castle or Sunken Valley. However, this pace problem, which first arises due to how long it takes players to fight the first real boss, does not allow Sekiro to take the first place in the FromSoftware catalog. At the same time, when the game finally decides to start accelerating, it stands out with the representation of enemies, such as Gebu Oniwa, and subsequent bosses.

Sekiro: Shadows Die Twice is already available for PC, PS4 and Xbox One.