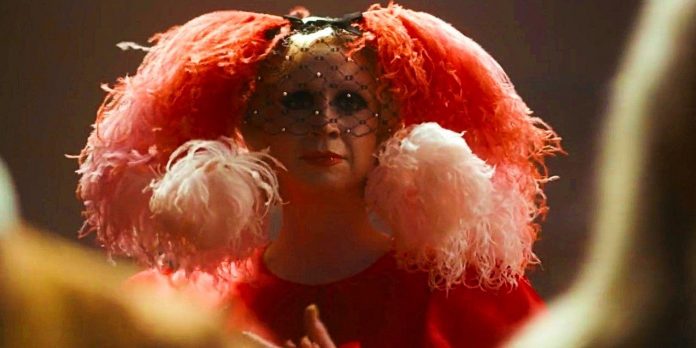 Gwendoline Christie stars in Flux Gourmet as Jan Stevens, an eccentric and fashionable head of the Sonic Catering Institute. In the film, Jan Stevens (referred to only by her full name) hosts an artist collective that uses the sound of food in their performance art. Meanwhile, a different group of artists that Jan Stevens rejected for a residency is quietly seeking revenge against her. What transpires in during the residency is a humorous, outlandish, and sometimes unsettling peek at the collaborative artistic process mixed with an empathetic look at the people who make up at the group.

Christie is perhaps best known for her role in Game of Thrones as Brienne of Tarth, but since the conclusion of that show, she has branched out into other ventures. She can be seen next in two Netflix series: Wednesday from Tim Burton and the upcoming Neil Gaiman adaptation The Sandman. Flux Gourmet is directed by Peter Strickland and also stars Asa Butterfield and Fatma Mohamed.

Screen Rant had the opportunity to sit down with Christie and discuss Flux Gourmet, including reuniting with Strickland, how her enigmatic character came to life, and her thoughts on the new Game of Thrones announcements.

Screen Rant: I love Peter Strickland. And Flux Gourmet was so weird, so strange. It’s so visually striking and narratively interesting. What it was like to go from reading the script and then seeing that final product? How did you feel when you finally saw Flux Gourmet?

Gwendoline Christie: I’m so so happy that you love the movie. I love the film as well, I really do, and it’s been a long time coming. I think we may even have been delayed by about a year actually in making it. I loved this script so so much and I always loved Peter’s work. I love The Duke of Burgundy. I loved doing In Fabric. I really loved that movie as well and adored Marianne Jean-Baptiste in that movie. I thought she was just sensational.

And the idea of me playing a lead part in one of Peter’s was just thrilling to me really. And I couldn’t believe it when I read the script because I thought it was brilliant, dense, hilarious, [and] new. The dialogue, Jan’s dialogue is so dense and complicated. And Peter said to me, “You said you wanted a challenge.” And I was just thrilled that there was this character that just made my heart sing, it really, really did. I relish the opportunity, it felt like a golden opportunity at last to play the kind of character that I really would absolutely love to play, and feel such a great degree of strength playing as well and get to use some acting muscles that I hadn’t used before. Also, express more of who I am and what my interests and loves are in terms of aesthetics and materials, and tone, [and] story.

But that character of Jan; I’m just in love with Jan. Jan was really just tough to play, very demanding. Jan is demanding. Jan’s very demanding [laughs]. It took a very long time to learn my lines, because the dialogue is so complicated, and it moves at such a pace and at a much faster pace. And obviously, it has all of these words that are not in my common parlance, these words that aren’t everybody’s everyday dialogue.

That’s what I received in the writing. When I read it, it was that Jan was a very elegant lady who was quite invested in an idea of classical femininity in a balletic sense, in and in the manner of an [Edgar] Degas painting and, at the same time, is an inferno of passions, pain, loneliness, and complexity. And that was just the biggest thrill because characters like that don’t come along very often.

I was so grateful that Peter afforded me the opportunity to be collaborative, and for us to really talk about the character, but also to have so much input in the way that the character looks. My partner Giles Deacon designed Jan’s costumes, so that was a phenomenal creative experience to have because he loved Jan as well and loves Peter’s films, and loved the script. So it felt like a very fulfilling creative expression. And then it is a miracle that this film was made during these years of the pandemic that we’ve had, and we didn’t have a huge amount of resources or time. I think a really sterling job has been done. And I’m also just so thrilled to get to see everybody else’s work and to work with such a brilliantly talented cast who have brought to life such delineated, extreme and extraordinary characters. I loved it. I really, really loved it, loved Jan and her world.

Jan has these little quicks and tics: the way she talks, the way she moves, and all of these tiny little details that create this amazing character. How does that come together for you?

Gwendoline Christie: I think the beauty of Peter’s script is that there is so much on the page, and he has very strong ideas about the character. I was very lucky in that, mine were the same. I felt like we were totally on the same page with the character. And I just really, really loved bringing John to life. I’ve also not played a character who is invested in the idea of classical, flamboyant femininity, and simultaneously is truly in love with the idea of formality. I mean, it’s quite unusual, for those two elements to come together. So it was just the most glorious experience really thinking about Jan.

I did a lot of work with a wonderful dancer called Harry Alexander, who’s part of the Michael Clark company. And so we did work on Jan’s physicality. We explored ballet, which is something that I did as a child, and I did when I was training to be an actor at Drama Centre, London. We went back to that, and we worked in a room together on those balletic movements and how that fed into Jan. And then there are all those other elements like thinking about that but also thinking about Jan’s supervised rage, Jan’s hatred of being usurped, hatred of being of rudeness and disregard.

And simultaneously, I think it fuels Jan; I think it really fuels the character. So lots of different little bits and pieces, which are all in the script, and also fired off the page. And also, were in the room just in the moment with those fabulous actors. So it was divine. I really loved it. I loved the creative expression of it.

Gourmet Flux is this microcosmic look at this collaborative process of making art and there was this metatextual layer of you all filming this in 14 days on one location. Did you find yourself seeing similarities between that and the artistic process happening in the film?

Gwendoline Christie: It’s interesting, isn’t it? I mean, I’ve never made a film in 14 days but I thought it was such a fulfilling, creative process during the filming hours. But it was also very exhausting. Really exhausting. You have to move into a position of everybody working on the film or anybody working on any filming, particularly the crew, they have to move into a position – I do anyway – of recovery afterward. So it’s like a tap that you have to turn on first thing in the morning when your day starts, and then you have to switch it off because there’s only a limited amount of water in the tank.

You also worked with Peter Strickland on In Fabric. What was it like to reunite with him? How did you find the process of filming Flux Gourmet versus filming In Fabric?

Christie: I really appreciated the opportunity to have so much creative freedom, actually. That’s what I really, really appreciated. And I had a tiny part in In Fabric, I really did. And that was a part that was, you know, I really wanted to work with Peter and there was a tiny part that I’m not sure even had that many lines called Gwen, who was obsessed with modeling and quite bitchy. I thought that was really, really hilarious. I was filming Game of Thrones at the time and some other things, which I was very, very lucky to be doing. And so it was just two days, [I] literally just did two days. It was similar in that we didn’t have a lot of time and it’s independent filmmaking. So there’s a roughness to it, a rawness to it, but that rawness feeds into what you’re doing and the best thing you can do is to use it for the character.

And I was completely thrilled to be given the opportunity to play the lead in Peter’s film, and also to play as an actor, something that’s so radically different from what I’ve been known for doing over the last 10 years of my career. So that was just thrilling. Peter has a really fantastic aesthetic sense and so that’s very close to my own natural tastes and that has been my natural tastes and home ever since I can remember really. So I felt right at home where things were stylistically. And it was really great, I would just love more of those opportunities. I would love the opportunity to continue to work with filmmakers who are very distinct, have a very unique voice, [and who] are very committed to their vision. But also great collaborators. That’s really what I love, is being afforded the opportunity to be creative and to have this wonderful collaboration with everybody on the set with the crew to create something. So it’s a wonderful thing to be able to feel like you are at moments allowed to be at your fullest.

There’s so much going on in the Game of Thrones world right now. Are you or would you be willing to come back as Brienne in the Jon Snow sequel? Are you excited for House of the Dragon? How do you feel about all that?

Gwendoline Christie: It’s so funny, isn’t it? Because I will genuinely always be so unbelievably grateful for the opportunity to play Brienne of Tarth. I love the character so much, and it came about at a point in my life… It’s something that had never happened before, which is that I read a character that truly spoke to me and spoke about some of my experiences, and experiences of my friends that felt like they weren’t being explored on television or in mainstream media.

And what I love now is, like my project Wednesday with Tim Burton, being afforded the opportunity to be given these parts like Jan Stephens. Parts that feel that they ignite you. I loved Brienne so much. I also, as an actor, really wanted the opportunity to do different things. And so Jan Stevens is glorious.

Problems with My Hero Academia movies