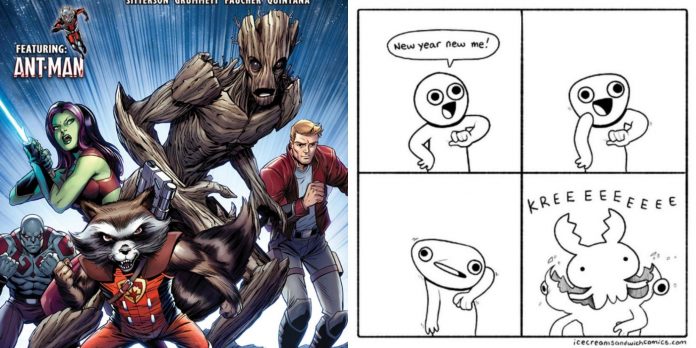 It’s confirmed that Guardians of the Galaxy 3 will be released in March 2023, and Marvel fans are obsessed with it. The films have brought to life many characters, each of whom is charming, interesting and funny in his own way. No matter how colorful and exciting the films have been since then, they tend to deviate from the memorable plots illustrated in the comics.

The character development for each Guardian was memorable and carefully thought out by the authors. There are many aspects of the team that contribute to their successful missions and meaningful impact in space. Despite the significant differences in the background of the characters and the real plot of the comics, Guardians of the Galaxy continue to bring life and humor to the universe.

Thanos must beware of Drax

Drax started out as a person living a normal life. After his family was killed by Thanos, Drax’s spirit was placed by Kronos in a much stronger body. From that moment on, despite the distrust of his comrades, he was destined to kill Thanos.

Drax is sometimes described as slow, unfocused and, frankly, a burden. Kronos created Drax with all his strength and abilities to fight Thanos and restore balance in the universe. Drax has all the enthusiasm, confidence and determination he needs to achieve his goal. In the comics, he did this by killing Thanos.

Starmora has never been a thing

Despite the fact that Star Lord and Gamora maintain their relationship on screen, this has never happened in the comics. In cartoon form, Peter Quill actually had a very serious girl Kitty Pride. They even got engaged before breaking it all off.

There was almost no romantic tension between the members of the comic book dream team. In particular, everything was platonic between Star Lord and Gamora. Of course, these two always had characteristics and abilities that complemented each other. It’s safe to say that fans are grateful that the storyline in the films went in a different direction.

The mantis has a crazy past

Mantis has a very colorful past, which is not touched upon in the films. She is capable of much more than just causing sleep and feeling people’s emotions. Mantis is the daughter of a villain who left her to be raised by the priests of Pama. She became advanced in martial arts and received many prophecies about her future.

Each member of the Guardians of the Galaxy has combat abilities and unique skills that make them useful in missions. The mantis got its name because of its innate ability to defeat men in battle. She is a very powerful ally in battle and has fought alongside the Swordsman, the Avengers and finally the Guardians. Mantis is as ferocious as her brethren.

There is a possibility that Thanos really loved Gamora. He shows it no worse than any killer father. The relationship depicted in the movies is pretty accurate when it comes to this famous dad and daughter duo. Thanos had a mission, and he would never let anything hold him back.

Thanos’ words and actions contradict each other in many cases. He looked people in the eye, telling them he was helping them, and then killed their entire family. Thanos is so disconnected from reality and love that he actually killed Gamora twice in the comics. In any case, the famous villain loved power and “balance” more than his adopted daughter.

Rocket and Groot are best friends

Rocket and Groot have always shone as a pair of best friends. They work well together and are connected by the fact that they are social outcasts. The bond they share is palpable in comics and movies. The two guardians had been inseparable since the first mission Quill had been ordered to assemble by the Kree.

Regardless of their very different backgrounds, one as an experimenter and the other as a member of the royal family, they combine all the necessary skills and powerful experience to help the Guardians succeed in battle. Fans held these two tightly to their hearts, so naturally, reading about how Groot sacrificed himself for his friends in the Battle of Xandar should have touched some heartstrings.

Yondu Udonta and Peter Quill had an uneasy relationship at best. The terrifying pirate Lord has tormented and traumatized Star Lord since he was a young orphan. In much easier cases, the two teamed up in the fight against Ego, giving Yond the chance to become the father Quill had always craved.