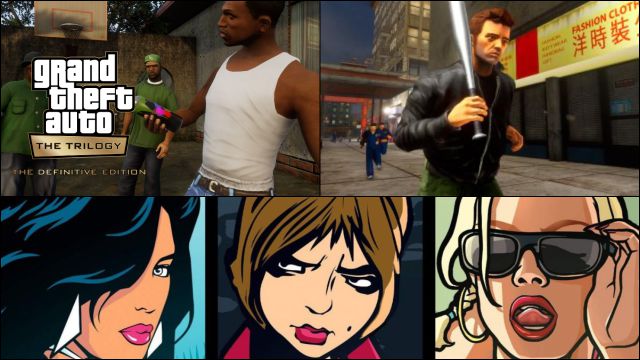 Grand Theft Auto: The Trilogy – The Definitive Edition solves dozens of reported problems and bugs in all three games; some prevented progress. Rockstar Games has released update 1.02 for Grand Theft Auto: The Trilogy – The Definitive Edition for PlayStation (PS4 and PS5) and Xbox (Xbox Series X | S and Xbox One) consoles. After having to apologize for the state in which this long-awaited remastered compilation of GTA III, Vice City and San Andreas was released, below the quality standards desired by the North American company itself, and promising that they will apply improvements and changes soon, now here is the first of those great patches.

According to the patch notes – currently in English; will be translated soon—, the three titles have undergone severe improvements, taking for solved some serious bugs that prevented even progress in the game. Broadly speaking, Grand Theft Auto: The Trilogy – The Definitive Edition improves the overall experience on PlayStation and Xbox consoles by solving control problems, menu management, technical elements (both sound bugs and graphic and visual problems) as well as Of the characters; from animations to event activation.

It should be said that the complete list of changes for version 1.02 of GTA: The Trilogy – Definitive Edition does not affect the Nintendo Switch version for now, which is also plagued with problems, as reported by the players themselves.

We leave below the general changes and improvements of patch 1.02 of the game on all platforms (PS4, PS5, Xbox Series, Xbox One). It is advisable to update each title before starting to play to improve the experience of our game sessions; Internet connection is required.

Grand Theft Auto: The Trilogy – The Definitive Edition will arrive in physical format for PlayStation, Xbox and Nintendo Switch consoles on December 7. It is to be hoped that by that time the performance of the three titles will approach what is desired.

GTA The Trilogy – The Definitive Edition: main improvements of patch 1.02

Sakuna: Of Rice And Ruin Is Updated With Spanish Translation On...

What Does BFFR Mean in TikTok?