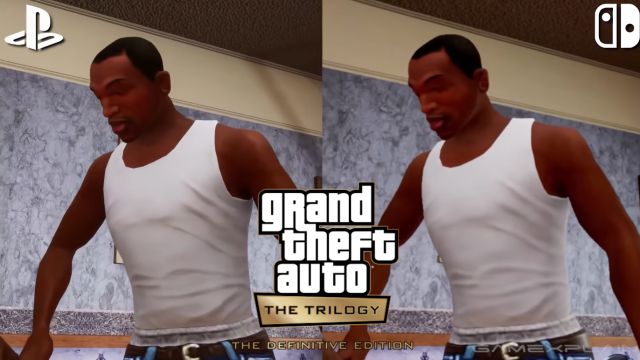 GTA Trilogy: They put the PlayStation 5 and Nintendo console versions of Grand Theft Auto: The Trilogy – The Definitive Edition head-to-head. Which one do you choose? Grand Theft Auto: The Trilogy – The Definitive Edition from this Thursday in digital format for PlayStation, Xbox, Nintendo Switch and PC consoles. The unforgettable installments of GTA III, Vice City and San Andreas burst into the current generation of consoles with a renewed technical section (textures, modeling, lighting, drawing distance) as well as severe changes in the control, now improved and optimized; added to quality of life improvements.

Depending on the version we will have some advantages or others. In the following GameXplain video we can see the PS5 version -which reaches 4K resolution- face to face with the Nintendo Switch version, whose particularity is to be able to play in portable mode.

Comparison of GTA Trilogy between PS5 and Nintendo Switch

Starting with Liberty City (0:00), the video goes through the three installments with identical sequences so that we can see what the main technical differences are in Grand Theft Auto: The Trilogy – The Definitive Edition on both platforms. Thus, from GTA III they go to Vice City (2:46) and San Andreas (5:01). The differences in resolution, polygonal loading of the textures and pop-in are evident.

It is therefore up to each one to prioritize the mechanical section or the convenience aspects. Would you rather have the option to play in handheld mode? Do you stick with the 60 FPS of the PS5 version in performance mode? Switch users can take advantage of the gyroscope control and touchscreen to zoom in on the camera. For its part, on PS5 it is possible to enjoy the game in resolution up to 4K in quality mode; or in performance mode at 60 frames per second.

Bella Thorne Lost Her Acting Job As a Child After a...

Some Steam deck models have apparently been downgraded