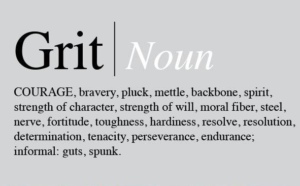 What do people who succeed have in common? It is a question we have all asked ourselves. Angela Duckworth, a professor at the University of Pennsylvania, also formulated it. The American researcher also tried to answer it. For that, she analyzed the characteristics of the winners. She took patterns in various groups: elite athletes, successful entrepreneurs or students. She concluded that, from the start, success did not come from talent, education, or intelligence, but from a set of skills that makes certain people do not give up on their goal, as happens to cadets from West Point, the oldest military academy in the United States.

Duckworth studied the cadets who managed to finish their military studies. The selection process to enter the institution is very rigorous. Each year there are more than 14,000 candidates for a total of 1,200 places. The elect have extraordinary notes and unrivaled physical attitudes. However, one in five cadets leaves the formation. This data shows an error in the initial selection. Most of the casualties occur after the first seven weeks of training in the first year, called bestial because of their hardness. Many psychologists have tried to explain what characteristics that 20% of students leaving West Point shared, with the intention of reducing the percentage. They didn’t find the code until Duckworth offered an answer.

The great winners have a fierce determination that acts in two ways. On the one hand, they show extraordinary strength and tenacity. On the other, they know, at a very deep level, what they want in life. In Duckworth’s words, “They not only had determination, but they also knew where they wanted to go. This combination of passion and perseverance was what distinguished the great winners. They had a grit. ”

Grit is a concept that Duckworth became fashionable from 2016 thanks to her magnificent book The power of passion and perseverance. In Spanish, the concept would be equivalent to determination, the spirit of sacrifice, to putting the world on its own. Or to a mixture of all this. As the author herself acknowledges, it is more than all the previous adjectives, there is even the possibility of measuring our grit. Duckworth has developed a scale tested in various countries and is currently used in training centers in the United States. The scale is based on 10 statements that measure passion and perseverance (the English survey can be filled in this link and is translated in your book).

Our grit has no relation to genes. For example, research in the United Kingdom on pairs of teenage twins determined that passion corresponded to genetic factors in 20% and perseverance in 37%. This finding means that most of our grit ability is due to personal experiences, how we have lived them or how we express them. In short, the grit can develop if we train passion and perseverance.

Passion is not enthusiasm, which is usual, but the obsession that accompanies us until we reach a goal. As we focus on our projects without being distracted by new ideas, we will be training our grit. While passion focuses us on the goal, perseverance and perseverance allows us to finish what we started despite the difficulties. If we are able to not surrender to setbacks or to awaken our determination, according to the science of self-improvement, we will have more possibilities to succeed in what we set out to do.