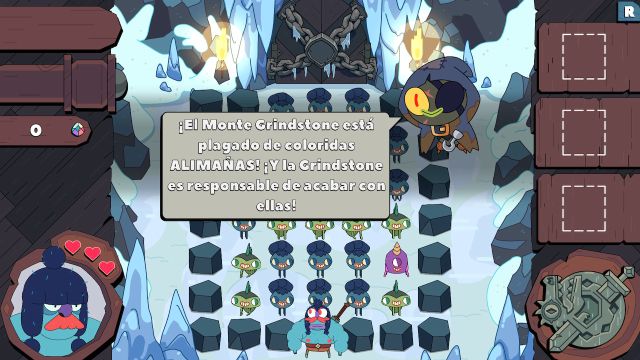 When we think of the most recommended video games from Apple Arcade, the subscription service of the North American company, Grindstone inevitably comes to mind. It premiered, built a reputation for quality, and recognized itself as the ideal solution for Candy Crush formula lovers who wanted to break away from micro-payments, waiting times, and typical free-to-play practices. That is, in short, Grindstone; with the fortune to stand out, above all, for its unquestionable quality and a design capable of trapping you for hours, days and weeks. His arrival on Nintendo Switch is great news.

A formula that does not fail: simplicity, addiction, depth

Let’s start at the beginning, what is Grindstone? A title of puzzles, RPG mechanics, strategy and gameplay based on advancing little by little through dozens of levels connecting enemies of the same type or color; hence the grind. If we get to the door, we move forward. And so on continuously, with more and more weapons, equipment, challenge and enemies that will make things more complicated for us.

It is the latest work by Capybara Games, known by titles such as Below, Superbrothers: Sword and Sorcery or Super Time Force. A studio that understands the language of mobile apps and knows how to make good use of the reduced space on smartphone screens to develop experiences that do not renounce anything. An intelligent approach that is also breathed in the current protagonist, although there is a difference: the Nintendo Switch version is not played vertically, but horizontally. This is not a trivial topic, so it is clear from the beginning that, although we recommend this edition for the hybrid – especially on Nintendo Switch Lite because of its size – we must also say that it is not the perfect way to play it, but a ideal way to do it on a console for its use of hardware. The port is impeccable.

Grindstone was born as a mobile video game for a reason. However, we were pleasantly surprised by the adaptation, it makes it clear that it is possible to migrate the mobile game formula if there is effort and dedication in the attempt. Here is a rare warning: there are no micropayments, there are no bars indicating the time we have left to recover life, and no advertisements between screen and screen. To make matters worse, if you like the typical RPG progression mechanics that invite you to be constant and come back frequently to improve your statistics, added to a slight roguelike touch, everything invites you to think that you are going to like Grindstone; and you may like it a lot, because it asks for very little and it offers you all the good that you would expect from the most popular matches on the scene.

How to Play Grindstone and Why It’s So Fun

So let’s go on to explain how Grindstone is played and the reasons why it lends itself to spending at least ten or fifteen minutes a day. We have different levels with a lot of different creatures (vermin), each one of a different color or type. Our objective is to clean the area by eliminating all possible monsters through a chain line. We can draw the route vertically, horizontally or diagonally; the more combos, the more we will advance and the closer we will be to the exit to the next level. From time to time, Grindstones will drop, which are kind of a wild card: they count as the species you are chaining. You decide whether to go back, draw a diagonal, risk or take the fast track. All roads lead to the exit, the magic is in how to reach it. Simple, regardless of age. It just works.

His grace is how incredibly familiar and intuitive everything is. It seems that you have been playing all your life, and with each addition, with each danger or new item that you can use in combat, the gameplay becomes more complex … but it is not more confusing, but more profound. Capy Games has managed to hit the bull’s-eye in interface design, with a truly efficient on-screen arrangement of elements. All the additional information is left to the sides, without overlapping in a pop-up way on the board, so it does not overwhelm the view or pile on the vermin.