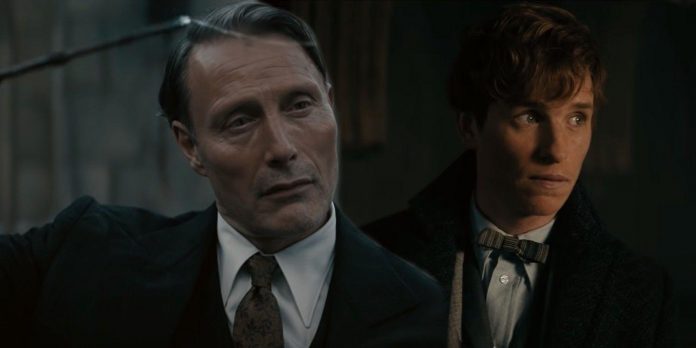 While J.K. Rowling’s Fantastic Beasts series was highly anticipated, it’s safe to say that the addition of Gellert Grindelwald (Johnny Depp and Mads Mikkelsen) ruined the series’ prospects. As of this writing, The Crimes of Grindelwald and The Secrets of Dumbledore hold markedly lower scores on Rotten Tomatoes than Fantastic Beasts and Where to Find Them and were widely criticized by audiences. After an underwhelming performance from the latest two movies in the franchise, it is unlikely that a fourth film will be made, despite two more films being slated to round out the series. However, if all the movies were produced as the first one was, with minimally-acknowledged influence from Grindelwald, the series would have been monumentally changed.

Throughout the Fantastic Beasts series, Grindelwald’s presence and history became more and more pronounced, particularly after the first installment. While in Fantastic Beasts and Where to Find Them Grindelwald was background flavor and a final plot twist at the end, in the second and third movies he was elevated to the main antagonist. In the latter two movies, Grindelwald escaped imprisonment, gathered followers, murdered civilians, and embarked on a plot to be elected as the Supreme Mugwump of the International Confederation of Wizards through manipulation and cruelty. Additionally, his connection to Albus Dumbledore (Jude Law) is heightened throughout the latter two films as one of the prime sources of conflict, as Dumbledore’s blood pact with Grindelwald in Fantastic Beasts prevents him from moving against the dark wizard.

Related: Why Johnny Depp Wasn’t In Fantastic Beasts 3 & Why It Worked

If not for Grindelwald’s influence on the Fantastic Beasts series, the direction of the franchise could have gone in an entirely different direction. But, due to his increased presence in the story, Grindelwald ruined the series by making the franchise about him as opposed to the characters introduced in the first film. If the series had prioritized Newt Scamander (Eddie Redmayne), Tina Goldstein (Katherine Waterston), Queenie Goldstein (Alison Sudol), Jacob Kowalski (Dan Fogler), and Credence Barebone (Ezra Miller) instead, the films would have been changed for the better.

If Grindelwald had never become a player in the Fantastic Beasts movies, his absence would have left room for the franchise to create their own compelling villains, such as Credence. Developing Credence, especially with his Dumbledore-family powers, into the series’ antagonist would have made him a more interesting and tragic character as he walked down a dark path through choice instead of manipulation; he certainly had enough reason to do so after the abuse he suffered from Percival Graves (Colin Farrell) and The Second-Salemers. Not to say that Graves couldn’t have still treated Credence poorly and manipulated him in the first film, but if Graves wasn’t revealed to be the Grindelwald at the end, then Credence would have been free not to join Grindelwald for vaguely-defined reasons, but to strike out at the world that hurt him as a powerful new villain. Not only would Credence have made a more diegetic antagonist, but he would have been a more personal and impactful opponent to Newt and his friends, especially after they attempted to save him in the first movie. As a villain, both his life and Credence’s potential death in The Secrets of Dumbledore would’ve been more meaningful.

Not only did Grindelwald crowd out a standout antagonist for the Fantastic Beasts series, but he derailed the franchise’s initial premise as well. Bringing in Grindelwald distracted the series from the conflict of magical creature conservation vs. magical secrecy that the first movie introduced, damaging audience investment in the entire franchise. If magical conservation and the conflict it provides isn’t one of the central pieces of the series, then the primary tension and climax of the first film feel irrelevant and Newt and his creatures suddenly have far less reason to be involved in later movies. While this choice might not have been a bad one, moving away from Newt and the magical creatures of Fantastic Beasts robbed the franchise of a new, interesting aspect of the wizarding world and left the series to focus on the common “stop the evil wizard” premise.

Additionally, moving the focus from the creatures to Grindelwald between movies one and two of the series not only invalidated Fantastic Beasts and Where to Find Them, but also made the franchise more scattered and confusing by switching thematic material after the establishing film. If the first Fantastic Beasts had been produced without Grindelwald’s surprise reveal, the following films could have stuck to the idea of magical creature conflict in different parts of the world. This would have freed the series to examine how creatures are treated across the globe, Newt’s future after Fantastic Beasts as he addresses those differences in his advocacy, and even invite more conflicts due to those who hunt magical creatures for their own purposes.

Related: Fantastic Beasts’ Grindelwald Is A Better Villain Than Voldemort

Newt Scamander Would Have Developed Better As A Main Character

Finally, had Grindelwald been less of a prevalent factor in the Fantastic Beasts franchise, Newt would have been allowed to fully develop as the series’ protagonist, instead of being relegated to a side character in favor of Grindelwald and Dumbledore. Newt has far less interest and personal connection with Grindelwald and his machinations than he does for his creatures and his friends. As such, including Newt in the struggle against Grindelwald feels superfluous when Dumbledore, Fantastic Beasts’ most powerful wizard, is the prime opponent of the dark wizard. Without Grindelwald, Newt could have continued to develop as the hero of the series. With villains personalized to challenge Newt, Tina, Jacob, and Queenie, Newt’s presence and character would have been a stronger tentpole for the series and validated the narrative weight given to him in the first movie.

Many of the issues Grindelwald presented to the Fantastic Beasts franchise stem from the series forcing in a villain that the initial premise didn’t appear to support. With Grindelwald missing from the movies, it frees the franchise from the forced connection to previously-established lore in the Wizarding World. This would have allowed it to grow organically and separately from the characters and conflicts set up in the Harry Potter series.

In the ranking of all the Fantastic Beasts movies, ever since the release of Fantastic Beasts and Where to Find Them, the films of the series have struggled to regain their footing with audiences. Although The Secrets of Dumbledore was able to fix some of the problems of its predecessor, the movie came with its own narrative and structural issues and still lagged far behind the initial success of the first Fantastic Beasts. With these performances, it’s increasingly unlikely that the franchise will receive another film, making it all the more unfortunate that the ruinous elements of the series could’ve been eliminated if Gellert Grindelwald had never been introduced in the first place.

The Walking Dead: Showrunner of the Show Pays Tribute to Michonne’s...