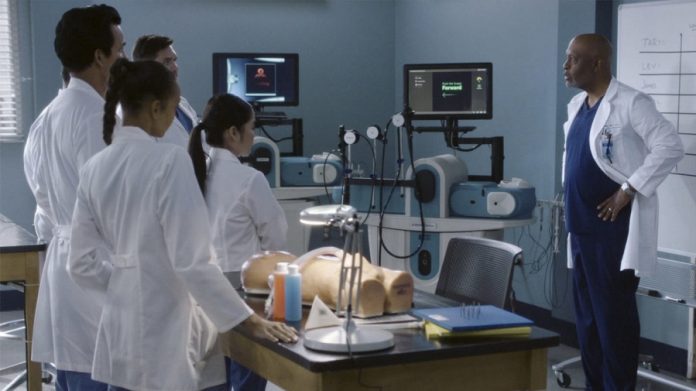 That way, check out more about what happened in the 18×2 episode of the medical series with our recap!

Last week, Dr. Hamilton (Peter Gallagher) made a very thought-provoking proposal to Meredith that she would need to move to Minnesota if she wanted to run a center that bears her name. There, she could find a possible cure for Parkinson’s, after all, there were several resources available in the place that would allow the advancement of research.

Meanwhile, at the Gray Sloan Memorial Hospital, Richard (James Pickens Jr.) replaced the surgeon in her role with the residents, talking mostly about the impacts of covid-19.

In this way, he proposes a solo surgery for the developing doctor who demonstrates great skills in some learning activities. Later in the episode, Levi (Jake Borelli) wins the infamous Surgery Olympics and as a reward works with Jo (Camilla Luddington) in removing an unusual object from a patient’s stomach.

Other doctors have also emerged in new cases, such as Owen (Kevin McKidd), Cormac (Richard Flood) and Megan (Abigail Spencer), who have cared for two victims of a car accident, who are father and son. While the latter recovers without major sequelae, surgeons discover that the father has pulmonary fibrosis, something he acquired during his travels to the Middle East.

All of this was going on and Meredith was still in Minnesota, thinking about Nick (Scott Speedman) and Hamilton’s proposal as well. Nick, even, had invited the character to a new date and accepting or not was another decision she needed to make. Who emerged in this context was Amelia (Caterina Scorsone), at the request of Meredith.

Despite being encouraged, considering the cause of Parkinson’s, Gray still doesn’t know what to do, especially when Nick comes into his thoughts. With that, she accepts dinner with the boy, who prepares an evening picnic full of creativity. Meredith confides in him that she is fearful of moving to Minnesota at the moment for a number of factors.

How many Pym particles were used in the endgame (is this...