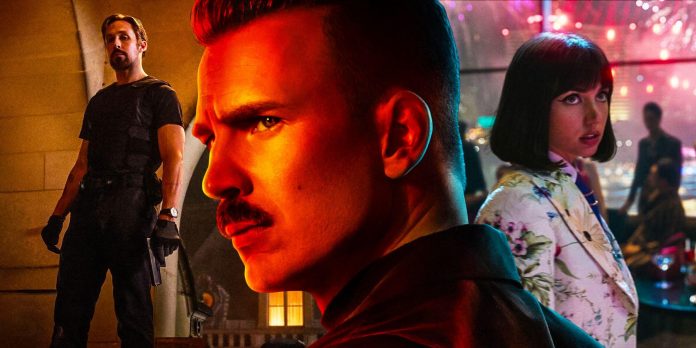 Warning: This post contains minor spoilers for The Gray Man

The Gray Man cast and character guide. Directed by Joe and Anthony Russo (known collectively as the Russo Brothers), The Gray Man is based on the novel of the same name by Mark Greaney. The film has been in development since 2011, with Brad Pitt initially set to star, and is set to be the rare Netflix film to receive a limited theatrical release before coming to the streaming platform.

The Gray Man follows the titular character (known to everyone as Sierra Six), a CIA operative who is on the run after one of his targets reveals that his higher ups at the agency are up to no good and are trying to get rid of anyone associated with the Sierra op. Sierra Six — who is known as Court Gentry in Greaney’s series of novels — must fight for his life and learn who to trust if he is to survive long enough to reveal the truth about what’s been going on at the CIA.

Related: Community: How Season 2’s Paintball Episode Led The Russos To The MCU

The film, which seems primed for a franchise, is an intense action thriller that sees a plethora of Hollywood’s most famous faces starring, including Captain America himself Chris Evans. Here is the full guide to The Gray Man’s cast, which characters they portray, and in what other projects audiences have seen them in before.

Court Gentry (aka, Sierra Six) is a CIA black ops mercenary who is recruited by Donald Fitzroy from prison. As an off-the-books agent, Sierra Six’s expertise is called upon when the CIA brass want to keep something under wraps, with Six effectively operating in the “gray,” hence the name “The Gray Man.” Sierra Six is portrayed by Ryan Gosling, who is best known for his roles in The Notebook, La La Land, Drive, Blade Runner 2049, Blue Valentine, First Man, Crazy, Stupid, Love, and The Place Beyond the Pines.

Lloyd Hansen is a mercenary who works with the CIA off the record, hired to do things when the CIA brass can’t sign off on it because of internal policies and procedures. Lloyd is hired by the CIA’s Denny Carmichael to find, capture, and kill Sierra Six. Of course, he finds that much harder than anticipated. Lloyd is portrayed by Chris Evans, who is best known for playing Captain America in the Marvel Cinematic Universe films, including Avengers: Endgame and Captain America: The Winter Soldier. Evans is also famous for his roles in Knives Out, Snowpiercer, The Iceman, Scott Pilgrim vs. the World, the Apple TV+ series Defending Jacob, and Fantastic Four. The actor recently voiced Buzz Lightyear in Pixar’s Lightyear.

Dani Miranda is a CIA agent who is on Sierra Six’s team in The Gray Man’s opening mission. She later helps him when she gets to be in the crossfire of the CIA’s hunt for Six. Dani is portrayed by Ana de Armas, who is best known for her roles in Knives Out, Deep Water, in which she starred alongside Ben Affleck, the James Bond film No Time to Die, and Blade Runner 2049.

Donald Fitzroy was Sierra Six’s handler before he retired from the CIA, leaving Six at the mercy of a new guard. Fitzroy is the closest thing to a father Six has and he tries to help the mercenary despite being caught in the middle of what’s now happening at the CIA. Fitzroy is portrayed by Billy Bob Thornton, who is best known for his roles in Monster’s Ball, The Man Who Wasn’t There, Goliath, the TV series Fargo, Friday Night Lights, Bad Santa, Love Actually, and Armageddon.

Denny Carmichael is a senior officer with the CIA who takes pride in the fact that he’s climbed the ladder from analyst to a top tier position in such a short amount of time. Denny is the one who orders the hit on Sierra Six to cover-up what he and the agency have been doing. Carmichael is portrayed by Regé-Jean Page, who is best known for playing Simon Basset, the Duke of Hastings in the successful Netflix period romance series Bridgerton. Page has also been in For the People, another Shonda Rhimes-produced series, Mortal Engines, Prime Video’s Sylvie’s Love, and The Merchant of Venice.

Suzanne Brewer is a senior officer with the CIA, working alongside Denny Carmichael. Unlike Denny, she knows using Lloyd to hunt Sierra Six will only land them in hot water, suggesting she plays by the rules more than he does. Suzanne is portrayed by Jessica Henwick, who is best known for her roles in Marvel Netflix’s Iron Fist and The Defenders, The Matrix Resurrections, On the Rocks, and as Nymeria Sand in HBO’s Game of Thrones.

Claire Fitzroy is Donald Fitzroy’s niece. Her parents died and he’s been raising her, with Claire trusting Sierra Six with her life after he’s tasked with protecting her a couple of years ahead of the start of The Gray Man. Claire is portrayed by Julia Butters, who is known for Quentin Tarantino’s film Once Upon a Time… In Hollywood and the TV series Transparent and American Housewife.

Wagner Moura as Laszlo Sousa – Laszlo Sousa is dubbed the “dry cleaner” in The Gray Man and is the man Sierra Six seeks out to obtain a fake passport so he can travel without being caught. But there is more to Laszlo than meets the eye. Wagner Moura is best known for playing Pablo Escobar in Narcos. Moura has also had roles in Tropical Paradise, Elysium, and Elite Squad.

Dhanush as Avik San – Avik San is one of the men who hunts Sierra Six after a hit is put out on him. Avik is also an associate of Llyod Hansen. Dhanush is an Indian actor who’s best known for the films Raanjhanaa and Vada Chennai.

Grand Theft Auto 6 really should allow players to advance in...

Nickelodeon All-Star Brawl, Analysis. Fun For A Little While