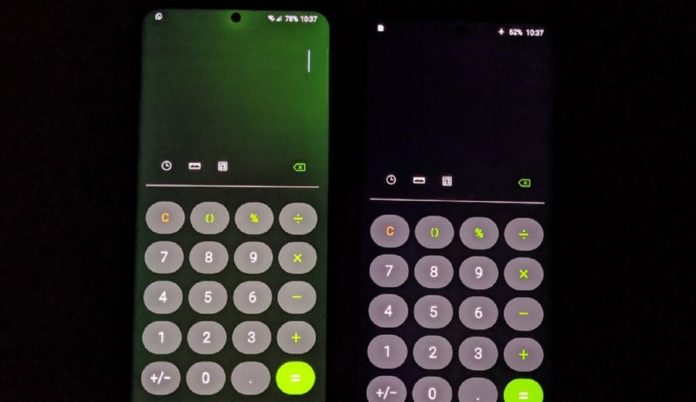 A strange green screen issue has been detected in Samsung’s new flagship Galaxy S20 Ultra with the Exynos 990. This problem, which is thought to be caused by a software update, runs the Camera application with a green filter when the screen changes to 120 Hz and the brightness is minimalized.

Galaxy S20s, the latest flagship phones of South Korean technology giant Samsung, were announced about 2 months ago. The company also released some updates shortly after releasing the phone. An interesting mistake reported by the Galaxy S20 Ultra users, the most powerful phone in the series, reveals that the update in question can open up business for consumers.

As you know, Samsung uses two different processors in its flagships, which sometimes causes some controversy. Because, according to many people, Exynos processors do not perform as well as Snapdragon processors. The fact that the new error reported by S20 Ultra users is seen in Exynos models confirms these claims.

According to some Galaxy S20 Ultra owners’ claims, if you open the Camera app by minimizing the brightness of the screen after taking the phone to a 120 Hz screen refresh rate, the screen looks green. Moreover, this green filter-like shade causes serious discoloration that cannot be ignored. According to some users, this problem also occurs when changing the screen to 120 Hz and switching between applications. The source of the problem is currently unknown.

Samsung has not made any statement on the subject. However, with this problem on the agenda, Samsung is expected to make the necessary correction. If you also have a Galaxy S20 model with Exynos 990 processor, you can determine whether this problem is with you and share it with us.