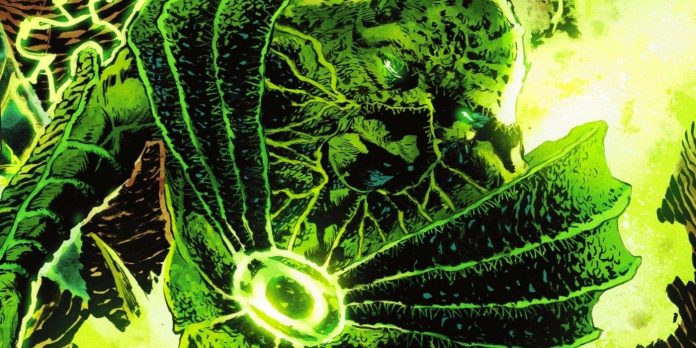 Attention: spoilers for The Swamp Thing #15 are ahead!

In the DC universe, Swamp Thing was recently endowed with the power of a Green Lantern, which made him realize the difference between the sources of their incredible abilities.

A new Swamp Creature has appeared in the DC universe. His name is Levi Kamei, and he is different from Alec Holland’s previous Swamp Creature. Levi is a little more restrained about his role as the new avatar of the Greens. But when Earth faces an alien invasion by a strange clockwork race, he intervenes to repel this powerful force.

Link: Superman Is Officially Teaming Up with Another of DC’s Most Powerful Heroes

In “Swamp Thing #15” by Ram V and Mike Perkins, Hal Jordan realizes that he cannot defeat this invading force alone. As the Green Lantern of the sector containing Earth, Hal is obliged to protect the planet from alien threats. Sensing that the Swamp Creature has come into contact with alien invaders, Green Lantern decides to endow him with his own Green Lantern power. This allows Swamp Thing to be reborn in a much stronger form and grow to an incredible size. Moreover, this new connection of the Swamp Creature with the Green Lantern means that it draws energy from two different sources.

The fact that the Swamp Creature was able to tap into both the emotional spectrum of the Green Lantern and its own power from the Green allows it to compare the differences between them. Green Lanterns are able to use their will, but this is an active phenomenon. Someone has to want something and strive for it in order to create the will that feeds the ring of Green Lanterns. This is different from the Swamp Creature to which the Parliaments of the Trees have bestowed their power. The Parliament of Trees is basically a force of nature that grows through patience and perseverance. This means that their power is more passive than the will, because it takes time to develop, and it grows over the years.

The great weakness of the Green Lantern Corps is that the will depends on human nature and human weaknesses, which means that people can be broken by circumstances as well as by any opposing force. When the will of the Green Lanterns breaks, they lose their powers, which makes them unpredictable heroes, especially when they face space threats. In contrast, the Green is endowed with the power of every living plant on Earth, and the Swamp Creature has survived staggering wounds in the past simply because it has so many resources that it can use to gather again. The Swamp thing only breaks down when the planet itself no longer supports plant life, which means that, unlike other Lanterns, he softens willpower with something more durable than his own sense of will.

It is the combination of both forces, emanating from both active will and passive perseverance, that allows the Swamp Creature to become the incredible entity that it is in this issue. Usually, when two opposing forces meet, they collide with each other. This could be seen if someone with the power of ice was somehow connected to someone with the power of fire. But in the case of a Swamp Creature, two different sources of energy inside it do not compete. Instead, he feels bold and empowered, being able to use two different types of power that he has a unique ability as a combination of human and plant. Although the Swamp Creature may be too busy with his duties to join the Green Lantern Corps, this challenge proves that he will be a huge asset and that Hal Jordan should be ready to turn to him in the future.