Home Entertainment Green Hell: How to get fats 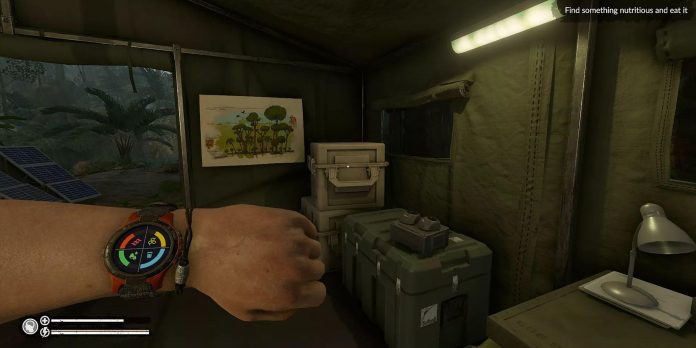 Green Hell is an open-world survival simulation game that puts players deep into the Amazon rainforest. It is told from the perspective of Jake Higgins, an anthropologist who travels to the rainforest with his wife Mia. Mia is a linguist who wanted to be the first contact with the indigenous people of a nearby tribe. Their exploration into the dangerous yet beautiful jungle turns for the worse, and Jake finds himself alone, with no one around to help him. Even worse, his wife is missing, and the only connection he has to her is through their radios.

RELATED: Green Hell: How To Get And Boil Water

Players have to keep Jake alive as he faces the unknown through his journey through the jungle. Other than a smartwatch and a backpack, everything that Jake needs has to be either found, created, or hunted for. There are four macro elements needed to keep Jake alive and at his most effective. These things can be monitored through the smartwatch; Proteins, Hydration, Carbohydrates, and Fats. Fats can be found within a number of different things that players have to be on the lookout for.

Nuts are probably the best source of fat for players to look for, as they can be found in many locations of the game. They will also respawn in the area after a time. There are three different types of nuts that can be eaten; brazil nut, unknown nut, and coconut. Brazil nuts are found at the bottom of brazil nut trees. Brazil nut trees are the tallest trees in the game.

These trees are also locations for many other things that the player will need to collect, like banisteriopsis vines, indigo blue leptonia, otherwise known as the unknown mushroom, and liana. The vines are a main component for Ayahuasca, the mushroom is a cure for parasites and liana can be made into rope.

Players can find three to four brazil nuts from one tree and have to harvest them to be able to eat them. They offer the most amount of fats out of all the other nuts giving back 35 fat. The unknown nut is a raffia nut from the raffia palm tree, and they can be seen falling from them sometimes. Players can eat them automatically without having to harvest them, and they replenish 15 fat.

The third nut players can get fat from is the coconut from the coconut palm tree. Players have to harvest the coconut by hitting it with a stone axe or axe. The coconut flesh inside can be eaten straight or cooked, both ways offer the same amount of fat but cooked coconut flesh also restores energy and sanity.

Fatty meats generally offer more fat consumption as well as other things like protein and energy. If made into a soup, the meat can also replenish player’s hydration. There are three different types of meat that players can hunt for. One is from a peccary. Eating it raw will give players the most fat, restoring it by 20, but it will also take from the player’s sanity and give them parasites.

Cooking the peccary meat offers the most fat, safely, replenishing their fat by 16. The next meat available is the capybara, and it offers more fat than the peccary, giving the player 20 fat when it’s cooked. It is also very high in protein. The third meat that can give fat is tapir meat, and it offers the most amount of fat out of the other meats, replenishing 24 fat when cooked.

However, it is also the heaviest meat to carry at 2.8kg raw, so it’s important for the player to make sure they have room in their backpack, so they don’t go over the weight limit.

Found items are consumables that can be found in very specific locations. Most of them are processed meats or snacks. All the found items, except eggs, will not spoil over time, so it is a good idea to keep them for moments when obtaining other food is difficult. Eggs can be found in bird’s nests and only provide a bit 10 fat and 10 protein. They can be eaten both as is or boiled. Boiling an egg offers a slightly bigger boost as it will restore sanity by 1.

There are two places to find it, inside the plane crash cave or inside a cave on Map 1. Finally, the last found item players can consume to get fat are bags of nuts, they offer the most intake of fats at 28. They can be found at the fishing docks and will also boost the player’s sanity by 5.