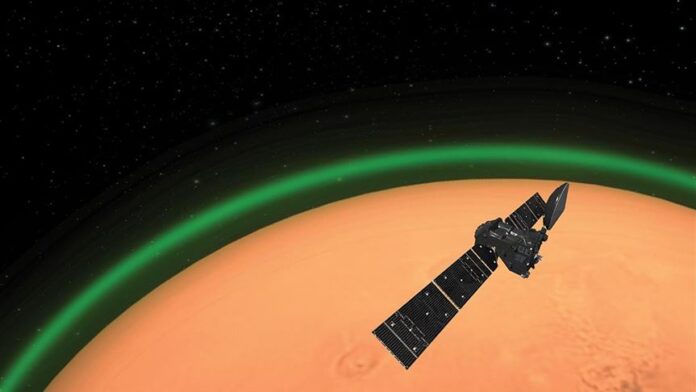 An emerald green glow was observed in the atmosphere of Mars. Scientists had been calculating this event theoretically for nearly 40 years. The reason for the green glow is that oxygen atoms emit a certain wavelength of light.

Jean-Claude Gerard from the University of Liege in Belgium said that this spread has been predicted for Mars for 40 years, but was first revealed through TGO. Gerard emphasized that green radiation is a characteristic feature of oxygen. Those who watch the sky at high latitudes of our planet observe this colorful phenomenon as ‘aurora’ (polar lights). The auroras are natural radiations that result from the interaction of earth’s magnetic field and charged particles from the Sun.

It is a little difficult to see the green glow from Earth:

Night glow is a little different from auroras. Night glow stems from the interaction of sunlight with atoms and molecules in the air. This interaction creates an inconspicuous but continuous light. It is very difficult to see this radiation. For this reason, observers often resort to indirect methods. That’s why the best images of our planet’s green night glow are captured by astronauts at the International Space Station (ISS).

It is even more difficult to detect the daytime glow, which is the daylight of this continuous glow. Moreover, the mechanism of this event is slightly different. The night glow consists of the reassembling of the separated molecules, while the day glow occurs when sunlight directly stimulates atoms and molecules such as nitrogen and oxygen.

Since astronomers have not been able to observe this green glow in the atmosphere of Mars before, they changed their methods and tried an approach similar to the perspective of looking from Earth to the ISS. The TGO team scanned the atmosphere of Mars from an altitude of 20 to 400 kilometers. They saw the glow of green oxygen at all heights, but they caught the strongest at an altitude of 80 km and this force varies according to Mars’ distance from the Sun.

According to the model established by astronomers, the element that forms the green glow is the breakdown of carbon dioxide. Carbon dioxide, which makes up 95% of the atmosphere of Mars; decomposes into carbon monoxide and oxygen. TGO found that these glowing oxygenes are both visible and ultraviolet light, and visible glows are 16.5 times more intense than ultraviolet. TGO has been revolving around Mars since October 2016.

UAE Will Send Mission To Venus And Must Land On Asteroid

Brazilian vaccine against covid-19 begins to be tested in animals