Home Tech The Great Development of the Hospital China Has Built for the Corona... 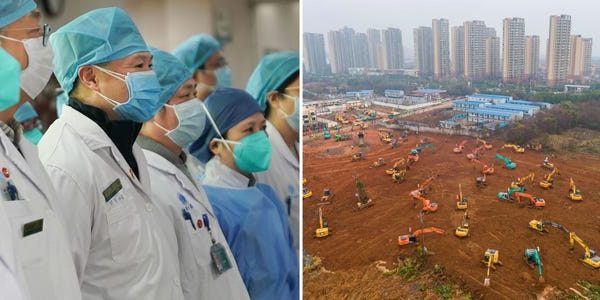 The hospital, which was started 10 days ago in Wuhan, China, will be opened on February 3. The hospital, where thousands of workers work, will be designed as a kind of ‘quarantine center’ and will have a capacity of 1,000 beds.

While the number of people who died in Wuhan, People’s Republic of China due to the deadly Corona virus spreading around the world has increased to 305, Chinese officials are making great efforts to control the outbreak. Due to the insufficient capacity of the hospitals in Wuhan, the 1,000-bed hospital, which was started on January 24, will be in service tomorrow (February 3).

Workers working on the construction of the hospital, which is built on an area of ​​25 thousand square meters, draw attention to the ability of China to make such fast constructions while taking three times the normal construction work. During the SARS outbreak in 2003, a hospital in Beijing was built within 7 days.

4 thousand workers and 100 heavy duty machines took part in the construction:
The Global Times announced that 150 health officials from the People’s Liberation Army in China have reached Wuhan, but it is not known whether these medics will work in the new hospital. According to reports by The Star, 1,400 medical officers from the army will work in the new hospital. While 950 of these come from the hospitals associated with the People’s Liberation Army Joint Logistics Support Force, the remaining ones are students studying in the medical faculties of the army.

Speaking to The Star, the project manager of the hospital construction, Fang Xiang, thought it would be an “impossible task” when they started construction. Xiang points out that a project of this size will normally last 2 years.

Here is the construction process that fits in 60 seconds:

The new hospital will be named Wuhan Huoshenshan (Mountain of Fire) Hospital. It is stated that a total of 4 thousand workers and 100 heavy duty machines work in the hospital construction. The hospital was built as a prefabricated building and was inspired by the hospital built in Beijing in the epidemic in 2003. Hubai province officials, located in the city of Wuhan, are planning to open another 1,600-bed hospital on Wednesday.

305 people have died from the outbreak in China so far. While the total number of cases exceeded 14 thousand, a region of approximately 35 million people in China was quarantined.