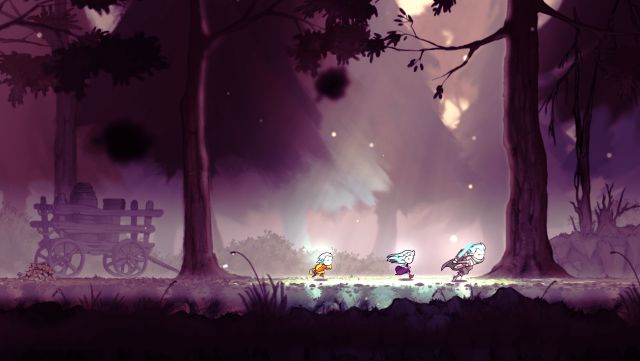 Greak: Memories of Azur: A hand-drawn adventure that bets on entertaining gameplay, platforms and puzzles; discover the secrets of Azur on PC and consoles. From time to time, independent videogames appear of which little or nothing is known and that suddenly draw a pleasant smile on our faces thanks to their finish; or various aspects that manage to overcome other not so brilliant characteristics. This is the case of Greak: Memories of Azur for PC, PS5, Xbox Series X | S and Nintendo Switch, an action platform with numerous puzzles that makes you fall in love from minute one and that is positioned as one of the most recommended and entertaining indies of the last few months. Developed by the Mexican studio Navegante Entertainment under the publisher Team17, its creators have completed an adventure of obvious classic 2D flavor with more layers than it might seem a priori and a dazzling staging with graphics and hand-made animations. Let’s see what secrets the magical lands of Azur hide from the hands of its three main brothers: Greak, Adara and Raydel.

As we say, the adventure begins in the lands of Azur, where the people of the Courines are forced to flee before the increasingly threatening presence of the Urlags, monstrosities that destroy everything in their path. In the fate of the survivors, a young man named Greak has a lot to say, the great protagonist of this interactive fable who will begin his particular journey to find his two missing brothers and, incidentally, save his fellow men. This is how this 2D side-scrolling adventure begins with real-time combat that will encourage us to take advantage of the skills of the protagonist trio to advance through vast levels full of challenges and puzzles, some of skill and others of logic.

We started the journey controlling the youngest of the brothers, Greak, armed with his little sword and his flimsy bow. While we follow the clues of the whereabouts of his sister Adara and his older brother Raydel, the inhabitants of the village in which we are will encourage us to complete several missions, some main ones to finish building the airship with which they intend to escape and other secondary ones to which we will have to explore each and every one of the corners of each level and thus unlock some combat techniques, for example. Although the plot amply complies with a simple but effective script, the true protagonist of the title is its gameplay and the options it offers, including a timid approach to the metroidvania genre.

Because yes, at certain times we will have to look for key objects that will serve to open new routes that we could not go through before, although the presence of these situations is rather secondary. Where Greak: Memories of Azur does shine and eagerly is in the cooperation between the protagonist trio, an aspect that will increase as we progress through the story and bring them together. And it is that each of them presents their own abilities that will serve to open paths, overcome obstacles and defeat enemies, especially some final bosses who will put us on the ropes, revealing a slight lack of balance between rivals and certain situations.

Matrix 4: Christina Ricci Will Be in The Next Film in...