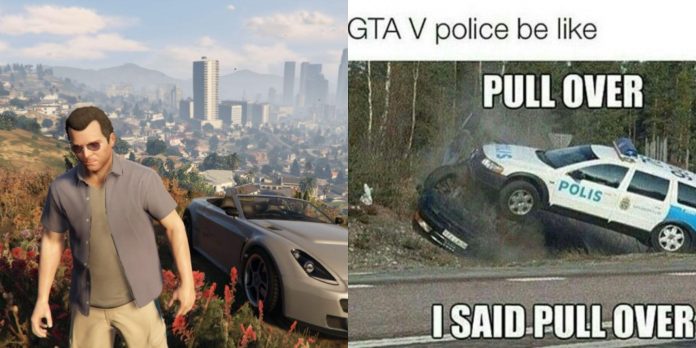 GGRecan reports that GTA Online will introduce Michael De Santa from GTA V in the game. His straightforward nature and funny quotes make him unforgettable for most fans of the franchise, so it’s certainly good news that soon you will be able to hear about him again with new content for the online version of the popular game.

The behavior of this beloved protagonist pretty much repeats everything that can be said about what players can do in the game and what they can get away with. The ability to own illegal substances, trade them, smuggle weapons, commit armed robbery and drive like crazy, among other things, are everyday events in this open world, and fans have created memes about how much fun it can be.

The police have nothing to do

Anything can happen in GTA V. From explosions and shooting to players flying jetpacks, it never ceases to amaze with its random events all over the map. In most cases it is caused by the player, but in many other cases they just happen.

It doesn’t matter if the player is walking on the sidewalk or driving, observing all the rules and behaving like an honest citizen (maybe for the first time in the entire passage), if something incomprehensible happens, for example, a car explosion, the police will not hesitate to pursue the player.

One of the best things about GTA V is how players can drive recklessly without thinking about health or car insurance. In real life, there are no consequences of speeding, driving in the wrong direction, colliding with several people, overcoming buildings or overturning a car — although for some it definitely hurts when one of the coolest cars in a video game gets into an accident.

Of course, this is not the case in the real world, where people buy cars, not steal them, and therefore try not to damage them. This meme succinctly describes the attitude of players to driving in GTA and real life.

While driving on the highway or the streets of Los Santos, most players wanted to try normal driving for a while. Staying in the lane, avoiding collisions with other cars, observing traffic lights and speed limits is tempting, but in the end, it’s not enough to keep players from enjoying performing the craziest car stunts and chases.

Players have enough time to drive normally and get stuck in unbearable traffic jams in the real world. GTA V exists in order to try to jump off cliffs, fly through the air, choose the most dangerous shortcuts and escape from the police in shiny stolen cars.

The Fallout franchise is guilty of reviving interest in jazz icons of the 40s, 50s and 60s, such as Billie Holiday and Ella Fitzgerald, and motivating their fans to add killer songs of this genre to their favorite Spotify playlist. Grand Theft Auto V was similar in this regard and has one of the best soundtracks that have ever been used in video games.

The game has an amazing soundtrack in the style of punk rock, which complements the overall energetic and cool atmosphere of GTA V. But what many players consider one of the best parts of the music in the game is that it not only has the opportunity to put amazing songs on the radio, but also great atmospheric tracks sound when turned off.

Most players love GTA because it allows them to do whatever they want in terms of crime. Getting into fights with innocent NPCs or killing civilians may be fun for some gamers, but for others it just makes them feel guilty. These are probably the same players who also feel bad when they kill an animal or make an evil decision in other games.

This meme perfectly sums up the exciting feelings of guilt and regret that many feel during the criminal fun in Los Santos. Those who are tormented by guilt should perhaps take a leaf out of Trevor’s book, following the advice from a quote that summarizes Trevor’s personality: “Just ignore the bodies!”

The game is addictive

The endless possibilities of freedom of players in the open world of GTA V force many to spend more time than necessary in front of the screen. Every fan was guilty of playing for more than an hour or two without a break or just spending many days in a row, mostly waking up, playing and falling asleep again.

If anyone is to blame, it’s Rockstar Games for making GTA V so much fun to play. An addictive game can only be perceived as a good review. Many would rather stay in Los Santos than spend a day in their hometown or city, and if Rockstar Games didn’t know about it, they wouldn’t have released the best open-world games for PS3, PS4 and PS5.