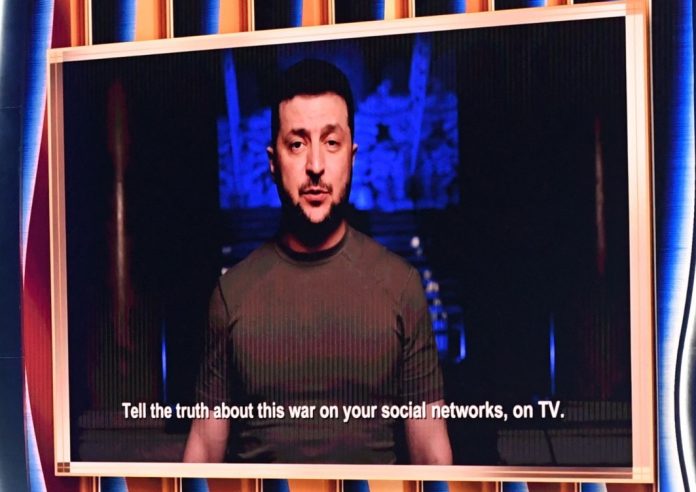 At the Grammy Award ceremony in 2022, President of Ukraine Volodymyr Zelensky shared an appeal to the audience on the eve of John Legend’s musical tribute to a country in crisis. See what was shared below.

The 2022 Grammy Awards were more than a celebration. During the awards ceremony on April 3, President of Ukraine Volodymyr Zelensky appeared in a video message to introduce John Legend, who performed a musical tribute to those who suffer in the conditions of the Ukrainian-Russian crisis. . Before handing over the scene to the Legend, President Zelensky called for support for Ukraine.

“The war. What is more repugnant to music? The silence of destroyed cities and killed people,” the Ukrainian leader gloomily shared. “Our children draw flying rockets, not shooting stars. More than 400 children were injured and 153 children died. And we’ll never see them draw.”

According to President Zelensky, parents in Ukraine “are happy to wake up in the morning — in bomb shelters, but alive. Our loved ones do not know if we will be together again.”

Linking his message with the musical theme of the evening, President Zelensky continued: “Our musicians wear bulletproof vests instead of tuxedos. They sing for the wounded. In hospitals. Even for those who can’t hear them. anyway. We are defending our freedom. To live, to love, to sound.”

Then President Zelensky shared that his country was facing “terrible silence” amid the ongoing situation with Russia, adding: “Fill the silence with your music! Fill it out today. To tell our story. Tell the truth about this war on your social networks, on TV. Support us in any way you can. Anything but silence. And then peace will come.”

As soon as President Zelensky’s speech came to an end, he remarked that he hoped that the famous cities of Ukraine would be “free, like you on the Grammy stage.”

After this performance, Legend took to the stage together with Ukrainian artists Suzanne Iglidan, Mika Newton and Any Yakimchuk to perform his new song “Free”. All the artists on stage were dressed in blue or yellow ensembles, paying homage to the flag of Ukraine.

Legend told E!’s Laverne Cox earlier in the evening that he couldn’t “wait for everyone to hear” his new tune, noting, “It’s going to be a special moment.”

Description of Cyberpunk 2077, Fans Will Be Sad