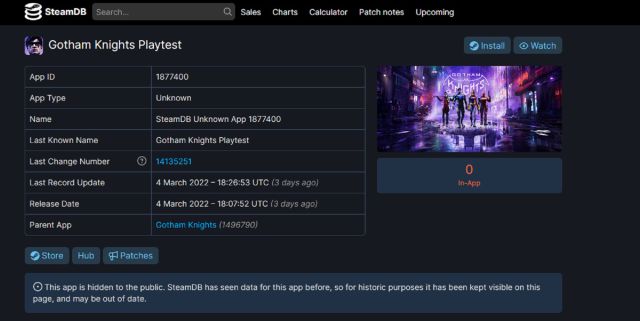 Gotham Knights: The Warner Bros. Games Montreal game is scheduled for this year 2022 and tells a story in which Batman is no longer present. The release of The Batman in theaters has not coincided with the release of a new video game set in the DC universe, but Warner Bros. Games Montreal is working on one of its most ambitious projects, Gotham Knights. The title starring Batgirl, Robin, Red Hood and Nightwing, which will go on sale this year 2022, suggests that it will have some kind of beta. The news has jumped because SteamDB, an automated system that tracks everything that is uploaded to the Valve platform, has detected the presence of the test.

The file has already been deleted

The file, Gotham Knights Playtest, appeared on March 4, but was later deleted. According to this information, it weighs 82.41 GB. At the moment, Warner Bros. Games has not announced anything about it, not even a specific release date. In any case, during the shareholders’ meeting that took place for the presentation of the financial results, the company stressed that the game will be released this year.

“This mission, this strategy, continues into 2022 with a sense of urgency,” he said at the presentation, with images from the DC title and Hogwarts Legacy. “With regards to Gotham Knights, the team at Warner Bros. Games Montreal will be bringing characters from the Batman family to life in a unique way to the delight of fans and gamers alike.”

Gotham Knights is in development for PS4, PS5, Xbox One, Xbox Series X, Xbox Series S, and PC. In addition to this project designed by those responsible for Batman: Arkham Origins, Rocksteady is developing Suicide Squad: Kill the Justice League, a product that does not yet have a release window. We will therefore handle the DC villains, who will use all their resources, tricks and deceit to bring down the members of the Justice League.

BTS’s Jungkook introduces a new phrase for “Netflix and Chill.”