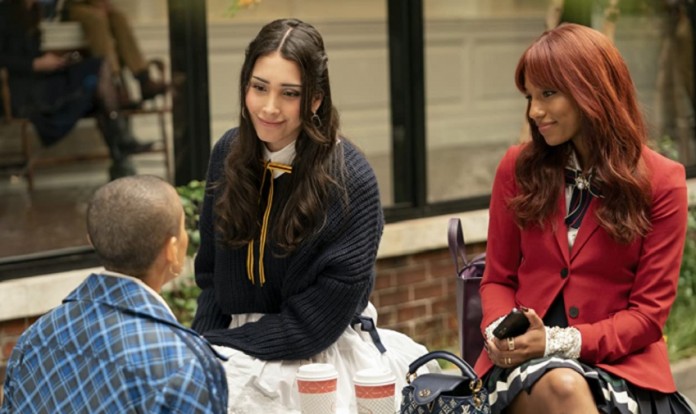 Gossip Girl: Last Thursday (2), fans of Gossip Girl could check out the last three episodes of the 1st season of the series’ reboot. And with the title “Gossip Gone, Girl”, the production said goodbye to the public, but leaving some questions open to be resolved in the future. The conflict between Zoya (Whitney Peak) and Julien (Jordan Alexander), for example, gained strength in the final stretch and presented even more interesting nuances.

That way, find out all about the season finale of the series with our recap!

Gossip Girl 1×12: What happened to the characters in the last episode of Season 1?

After several disagreements, reconciliations, and much gossip shared by Gossip Girl’s Instagram, the episode opens with Kate (Tavi Gevinson), Jordan (Adam Chanler-Berat) and Wendy (Megan Ferguson) realizing how their students have changed since they decided to act and that they could take time from then on to spread rumors. Meanwhile, Zoya, Julien and Nick (Johnathan Fernandez) were looking for another apartment in Queens.

Although Zoya is interested in going out with Shan (Grace Duah) on New Year’s Eve, Julien tries to convince her to go to a party alongside her Hudson at Aki’s (Evan Mock) father’s house. She accepts because she cannot say no to her sister. Audrey (Emily Alyn Lind) was worried about Max (Thomas Doherty), mainly because she had figured out all of her friend’s problems, considering her parents’ divorce. Thus, together with Aki, both invite Max to the party in Hudson.

Later, at school, reflecting on Julien’s relationship with Obie (Eli Brown), Monet (Savannah Lee Smith) and Luna (Zión Moreno) tried to advise Julien to invite her ex-boyfriend’s new partner to the New Year’s party. New. However, the strategy was to get the new couple to separate so that Julien could return with him.

At the party, Max is still downcast and Zoya realizes she doesn’t want to be there. Julien, Monet and Luna were ready to put Obie well away from Grace, with the latter finding out that the girl had a drinking problem. In this way, the three think about making her lose control and expose her problem. However, everything goes wrong and Obie discovers the trap.

That way, Obie doesn’t even want to know about his friendship with Julien anymore, and Zoya is shocked by what her sister was planning. Though it was too late, Julien tried to ease the situation by calling Shan to fetch Zoya. She also helped Obie with Grace, as the situation was chaotic.

Browsers with the greatest number of vulnerabilities have been announced: you...