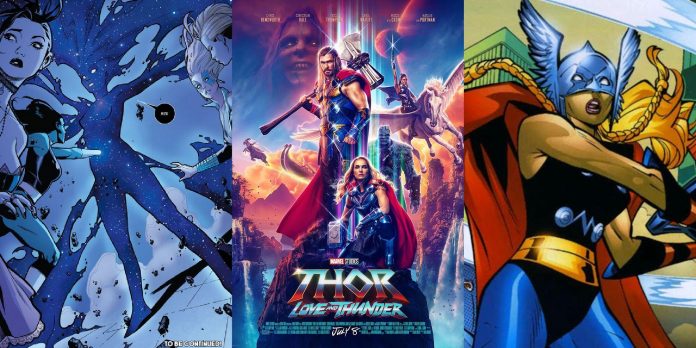 Thor: Love And Thunder ends with a touching development. Gorr the God Butcher wishes for his daughter to come back to life and entrusts her to Thor’s care. Love, as Korg names her in the movie’s closing moments, likely plays a major role in the MCU’s future. Several characters in Marvel Comics predict where her story might be going in live-action.

Love appears to share similarities with several prominent Marvel characters, including Eternity, who brings her back to life. But she also potentially evolves into Thor’s daughters from the comics. The multiverse introduced different versions, and while they share some similarities, each possesses unique qualities that the MCU may draw from as Love progresses on her journey.

One possible outcome for Love in the MCU involves a cosmic entity that shares her name. Mistress Love, or simply Love, first appeared in The Defenders #107 as the living embodiment of love in the Marvel Universe. She often appears in association with other abstract beings like Eternity, as she did in The Infinity Gauntlet #3.

Mistress Love controls love within all living beings, though her powers showed their limits when confronting Thanos at his most powerful. Though her abilities rank her among the most powerful cosmic begins in the Marvel Universe, she doesn’t possess Eternity’s multiversal capabilities. She appears differently to different people and as such has no specific gender. She appears as male and female depending on the context.

Love potentially patterns her character in the MCU after Thor’s children in the comics. Torunn Thorsdóttir joined the Next Avengers on Earth-TRN591, an alternate reality that appeared in Generations: Iron Man & Ironheart #1 in 2017. The comic refrains from defining Torunn’s character in too much detail, but she appears to follow in the footsteps of her father in terms of her commitment to protecting innocents.

She likely also shares his Asgardian superhuman strength, stamina, and longevity. Torunn wears armor that recalls the Destroyer, among Thor’s most powerful villains in the comics, and wields a giant sword that could be a clue to her mother, who was possibly Lady Sif. Next Avengers: Heroes of Tomorrow, an animated movie from 2008, established Torunn’s mother to be Sif.

Another Torunn Thorsdóttir appears in Avengers #1 (Vol. 4) from 2010. This version bears remarkable similarities to the Earth-TRN591 one, down to her costume and association with the Next Avengers, all children of classic Avengers, including Captain America, Black Panther, Giant-Man, and The Wasp. She hails from a divergent reality though, created when the Earth-616 Avengers time traveled to the future to defeat Ultron.

Torunn’s significance in several Marvel comic books, as well as animation, bolsters the prediction that Love eventually becomes her in the MCU. The team also battles Immortus in her first appearance, possibly hinting at future MCU developments. Immortus ranks among the most powerful Kang The Conqueror variants in Marvel Comics.

Love’s MCU future may follow a relatively new character in the comics. Brigid Thorsdottir first appeared in Captain Marvel #23, when Carol Danvers travels to the year 2051. She works alongside several surviving heroes in the aftermath of a cataclysmic event that killed her father and wiped out most life on Earth. Brigid works as a blacksmith for the heroes, as she’s unable to lift Mjölnir.

Brigid nonetheless joins the heroes in an epic battle against Ove, Namor the Sub-Mariner’s son with The Enchantress, among the most powerful magicians in the Marvel Universe. During the battle, Brigid finally proved herself worthy of Mjölnir and became Thor, something MCU fans might predict happens to Love in live-action.

Another safe prediction MCU fans might make about who Love might become involves a key character from the MC2 universe. Thena Thorsdóttir joins the Avengers, including Spider-Girl, in an alternate reality set twenty years in the future. Thena shares some biographical similarities with Love. Galactus destroyed her Asgard, leaving her among the few survivors.

Thena initially fights the Avengers after a misunderstanding but comes to ally with them as her father did. She uses a powerful weapon Jarvis crafts for her after her original hammer shatters fighting J2, Juggernaut’s son. Thena uses this hammer in lieu of Mjölnir, which presumably remains with her father who remains in the rebuilt Asgard in this timeline.

Love first appears in Thor: Love and Thunder in a haunting image that suggests she may simply be Eternity. After Gorr wishes for his daughter back, her silhouette appears reflected in the water. Stars and galaxies constellate her form just as they do Eternity in the movie and in the comics, suggesting she could be the cosmic entity in a new form.

Another possibility exists as well. Comic book fans know Eternity fragmented aspects of itself in the past, imbuing beings throughout the multiverse with them, as seen in The Defenders #92. Eternity also occasionally manifested in the world as a human being, using the alias Adam Quadmon.

Love’s haunting initial appearance also likely prompted fans to predict she has a connection with Singularity. This powerful being first appeared in A-Force #1, a living quantum singularity that fell out of the sky on Battleworld. Her spectral appearance, very similar to Love in the MCU as well as Eternity, suggests that Love could be some form of this unique character.

Comic book fans know Singularity emerged from 2015’s Secret Wars, among the most important Marvel Comics events. This key storyline clearly influences where the MCU is headed with the multiverse given the introduction of Eternity as well as the concept of incursions from Doctor Strange in the Multiverse of Madness.

Eternity’s sister in Marvel Comics, Infinity, also serves as a possible template for Love in the MCU. Infinity embodies space and everything within it in the Marvel Universe, and as such she possesses unimaginable dominion over space, time, matter, and energy. Her first appearance Quasar #24 hints at some MCU connections that could lead to Love becoming Infinity.

Quasar uses the Quantum Bands, powerful objects that access both the Quantum Zone and Infinity herself. The Quantum Bands loom large as a possible origin for Ms. Marvel’s mysterious bangle in the MCU and could lead to Love crossing paths with Ms. Marvel and Captain Marvel both as future storylines converge.

All the Strange Things you can Play Doom on, and why