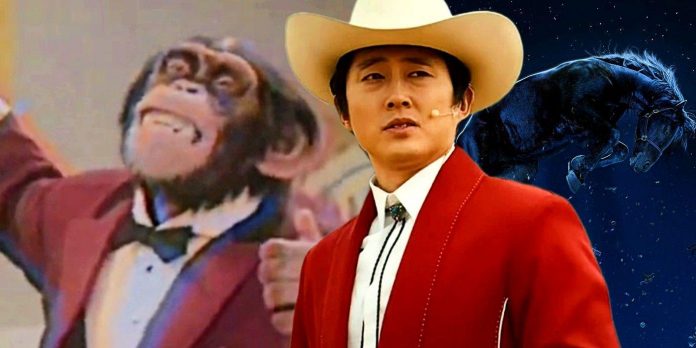 Nope‘s weird Gordy the Ape subplot may seem like the movie’s least relevant element, yet it’s actually quite crucial in tying together the various themes. Ricky “Jupe” Park (Steven Yeun), the owner of the Western-themed tourist attraction Jupiter’s Claim, was a former child actor on the ’90s show Gordy’s Home. While shooting the episode “Gordy’s Birthday,” popping balloons set the chimp actor playing Gordy off into a violent rage that killed, maimed, and permanently disfigured those present on set. Hiding under a nearby table, Jupe was spared from the chimp’s rampage. Upon calming down, the chimp even offered Jupe an attempted fist bump before animal control shot him.

Jupe later tells OJ (Daniel Kaluuya) and Emerald “Em” Haywood (Keke Palmer) that the incident prompted much media attention, including a MAD Magazine cover gag and a facetious-sounding SNL sketch. Jupe even holds a Gordy’s Home memorabilia room that includes Nope’s mysterious standing shoe, which was on set during the infamous incident and kept young Jupe’s attention during the chimp attack. While Jupe is understandably traumatized by the Gordy event, he nonetheless profits from the incident and outwardly pretends not to be terribly traumatized by it around others.

With that said, the Gordy subplot doesn’t seem nearly as significant to Nope as the movie’s other storylines, especially when considering that Nope’s opening shot gives the Gordy storyline more perceived relevance. Furthermore, given that Nope already has a 2-hour, 15-minute runtime, the Gordy subplot seems like the most appropriate storyline to shave time off because it doesn’t directly relate to the Haywoods or Nope’s shape-shifting alien. However, shortening the Gordy subplot or even removing it entirely would cost Nope valuable scenes that are critical in portraying important elements.

Nope’s main theme is exploitation in media. This is highlighted with a connection to the Haywoods as they claim an ancestral connection to the Black jockey appearing in The Horse in Motion, the first example of chronophotography that came about in the late 1870s; the jockey was exploited as part of the photography, for he’s given less name credit than even the horse he rides. This exploitation was part of a wider movement of dehumanization of Black people in a time only shortly after the passing of the 14th Amendment and is echoed with the exploitation of animals in the rest of Nope. The Haywoods train their horses to be used in media and Jupe exploits the saucer-shaped alien “Jean Jacket” as an amusement at his park. Gordy the Chimp’s purpose in Nope telegraphs this theme of exploitation in media for the pure sake of spectacle and its resulting consequences by creating a visceral and traumatic situation that shapes Jupe’s future.

Importantly, Nope’s Gordy storyline provides a more blatant example of exploitation. Compared to Gordy, Jean Jacket is too alien to be familiar to viewers, and the horses are too protected from over-exploitation by the Haywoods in Nope. Gordy is a recognizable animal whose sense of self is given no attention in Gordy’s Home and is treated as little more than a trained prop. It isn’t that the other examples of exploitation aren’t valid, but Gordy’s exploitation and the resulting consequences are the most overt and impactful.

However, to assume that Gordy’s purpose is to only express exploitation grossly oversimplifies his role in the film. By surviving the Gordy incident and nearly fist-bumping him, Jupe believes that he can tame a predator like Nope’s alien Jean Jacket so long as he establishes a comfortable connection with him, however falsely perceived that connection may be. As a result, this assumed connection with Jean Jacket costs Jupe and the 40 Star Lasso Experience guests their lives.

Why So Much Time Is Spent On Gordy

As important as Gordy is in Nope, it’s still worth asking whether or not he should have been given as much screen time as he gets. Gordy’s storyline is crucial in understanding Jupe and his eventual decision to train Jean Jacket for entertainment purposes, but the screen time he’s given expresses a deeper aspect about Jupe that goes beyond his tendency towards exploitation. The Gordy incident clearly traumatized Jupe, and the way that he processes the resulting trauma is appropriately complex.

During the moment, Jupe was transfixed by even the incident’s more minute details, like the shoe that helps connote Nope’s idea of a “bad miracle.” Looking at Nope’s themes of spectacle, Jupe and Gordy both darkly express how trauma can be a spectacle in its own way. Nope implies that a spectacle is anything too unbelievable or grand to look away from and carries the capability to create intense feelings in its beholder. Jupe couldn’t look away from the Gordy incident and continued to ruminate on it well into adulthood. As PTSD often does to those living with it, Jupe can’t easily “look away” from his trauma. He brings himself to the point where he even capitalizes on the incident’s memorabilia and praises the SNL sketch. All of this is portrayed by the amount of screen time the Gordy subplot receives.

Gordy Establishes The Difference Between Jupe And The Haywoods

The Gordy incident shapes Jupe into the antithetical version of OJ and Em. The Haywood’s Hollywood Horses ranch in Nope is where Em and OJ grew up training horses to put on film and TV. On the ranch, however, they also learned how to respect the horses’ boundaries. Meanwhile, the Gordy incident falsely taught Jupe that he can subvert an animal’s boundaries, bending an animal to his will so long as he establishes a strong enough emotional connection with them.

Jupe and the Haywoods share a key similarity: they both find Jean Jacket and decide to showcase it. However, whereas the Haywoods have no intention of training and overriding Jean Jacket’s predatory instincts, Jupe believes that he can treat Jean Jacket as a performer despite its inherent predatory nature. If it weren’t for Nope’s emphasis on the Gordy incident, this key difference wouldn’t be portrayed nearly as effectively.

Related: Why Nope’s Alien Dumps Blood On The Haywood House

How Gordy Is Fundamental To Jupe’s Arc

Exploitation in entertainment can be used as a way to present control over the seemingly uncontrollable, be it a chimp or Nope’s bizarre alien. After the Gordy incident traumatized Jupe and gave him an incorrect notion about his relationship with other animals, Jupe’s connection with Jean Jacket can be seen as a way for him to overcome his Gordy trauma. He profits from the incident and uses it as a further ploy to retain his relevancy at the Star Lasso Experience as evidenced by the disfigured Mary Jo Elliott being invited.

Looking further, controlling and exploiting Jean Jacket appears to be a way for Jupe to help himself overcome the Gordy incident. He was powerless during Gordy’s rampage, despite being spared from it. By controlling a more dangerous predator like Jean Jacket, he’s essentially mimicking Gordy’s exploitation in Gordy’s Home and proving to himself how it can be done without disastrous consequences. Unfortunately for Jupe, Nope shows that the disastrous consequences can be inevitable in such situations.

Gordy Shows How Cyclical Exploitation Can Be

This Nope costume Easter egg foreshadowed Jupe’s fate at the Star Lasso Experience with a red jacket having an image of a horse beaming up. The horse on the jacket shows what Jupe expects to happen, but with red symbolizing danger and blood, there’s a subliminal nod towards Jupe’s real fate. Regardless of Jupe’s outfit, Gordy’s nature of exploitation essentially being repeated through Jean Jacket at Jupiter’s Claim essentially already foreshadowed Jean Jacket’s attack. Nope isn’t trying to simply state that exploitation is “bad” – especially with the Gordy subplot, Nope‘s message runs deeper than that. Exploitation is cyclical in media due to the spectacle it can create. Gordy’s Home displays a wild chimp being tamed enough to be a part of a sitcom family. Likewise, repeating the exploitation cycle with Jean Jacket displays an unknown alien willingly showing itself to others, even if that willingness is an illusion.

Life Is Strange Remastered Collection: Where To Buy The Game, Price...

Pokemon Leaker Hints at a Third Legend Scarlet and Violet