Home Entertainment Gordian Quest: the best builds of the bard 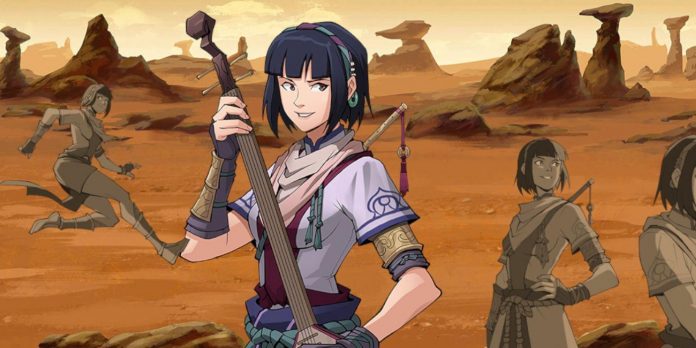 One of the more interesting character classes in deckbuilding RPG Gordian Quest is the Bard, represented by the character Naran. Having garnered some positive buzz for its blend of excellent card-building combat and the dice rolls and skill checks of the classic tabletop game Dungeons and Dragons, Gordian Quest can nevertheless be a little tricky to get into. The game features ten characters, each with multiple possible builds for players to try out, and although Gordian Quest features character picks for D&D newbies, Naran isn’t one of them. To make proper use of the Bard in Gordian Quest, players must first get to grips with some new mechanics that aren’t always straightforward.

The passion project of Singapore-based indie studio Mixed Realms, Gordian Quest, offers a variety of different game modes, chief of which is a lengthy 15–30-hour long campaign with multiple story acts. Players build a party of adventurers, doing battle with a wide variety of enemies through card-based combat and running into D&D-inspired encounters with plenty of decisions and virtual dice rolls to make. Now that the game is out of Early Access on Steam, Gordian Quest’s developers have discussed their inspirations in greater detail, naming classics such as Ultima and Diablo as being rich sources of inspiration for their game.

The love for D&D is perhaps most evident in how Naran the Bard plays in Gordian Quest. Like D&D’s Bards, Naran’s main role is to buff her fellow party members, debuff enemies, and build a strong defense for the whole party through song and dance. However, rather than dishing out high amounts of damage, Naran is meant to augment the offensive abilities of her party, acting as a force multiplier to boost damage and weaken enemies. It’s recommended that players not use Naran as a starting hero due to her relative lack of damage-dealing ability cards and low HP. However, the Bard in D&D can outperform most classes in a support role, and this is also where Naran excels.

The Mettle build requires the player to build Mettle Tones by playing Naran’s ability cards in the correct order. This usually involves opening a turn with the Intro of Vigor card, which starts making Mettle. Mettle is critical as it adds Red Tones, which activate powerful bonus effects on many of Naran’s ability cards. Players should then follow up with additional cards that buff allies, such as the Verse of Vigor, which grants additional Critical bonus damage to an ally, or debuff enemies such as Verse of Abating. Having Red Tones is crucial for players wanting to get the most from Naran’s abilities, as bonus effects from Red Tones can actually overshadow a card’s base effects.

These mechanics make the Bard harder to play compared to other characters, such as Gordian Quest’s Cleric Catherin. Therefore, alongside the Intro and Verse ability cards, players should also include cards that give Inspiration. Similar to Mettle, this also provides bonus effects on certain ability cards including on Chorus cards, which apply the effects of the Bard’s songs to the whole party at once. Therefore, getting the best results requires the player to carefully choose which cards they play in order to build up maximum Mettle and Inspiration.

Players using the Mettle build should focus on ability cards that either buff allies or debuff and weaken enemies, so they take additional damage. Which ability cards the player uses depends on the situation their party is in; when facing a lone enemy with high HP or powerful attacks, a debuff might be more useful in comparison to buffing a single ally, for example. Played right, Naran can quickly become just as powerful as D&D’s increasingly overpowered Bards. With the Mettle Bard, Gordian Quest’s combat becomes something of a numbers game, with some mental math and intuition involved so the player can figure out what best fits their combat situation. The best way to start with the Mettle build is to choose the Bard starter deck at the beginning of the game and put their attribute points into Naran’s Strength stat to improve her abilities as much as possible.

The base mechanics of the Bard are shared between all of Naran’s potential builds, so in the case of the Tempo Bard, the player builds Tempo by opening the turn with cards such as Intro of Swiftness or Intro of Zephyr. This, in turn, builds Green Tones, which activate bonus effects on most of Naran’s ability cards. D&D Bards grant a wide range of perks to their party, but Gordian Quest’s Tempo Bard focuses specifically on ability cards that buff allies’ Guard and Initiative. Guard blocks incoming damage and prevents enemies from applying debuffs to the party, making it essential in the player’s efforts to keep their heroes alive.

Players can also focus on cards that build Initiative, such as the Verse of Alacrity. Movement in Gordian Quest follows initiative order and buffing allies so they can strike first shifts the tide in the player’s favor. A skilled player can also use the Tempo build to control the battlefield by granting allies more action points so they can use their abilities (Chorus of Reflex), duplicating buffs and debuffs (Chorus of Empathy and Chorus of Communion), and even moving an ally to the top of the initiative order using Chorus of Alacrity. The Tempo build is a great way to pay homage to the wit and quirkiness of D&D’s Bards.

The Tempo build relies on Chorus cards, so players should aim to build Inspiration when making their first moves early in a turn. Tempo also relies heavily on ability cards boosted by Naran’s Dexterity stat, making this a priority for players who choose this build. The Minstrel starter deck makes a great starting point.

For the Glamor Bard, players build Glamor by opening with cards such as Intro of Mystique or Intro of Charming. This builds Blue Tones, which activate bonus effects on other ability cards. The Glamor Bard distinguishes itself from Mettle and Tempo as it lacks the specific focus of other builds and favors a broader approach to combat. D&D Bards have moved towards spellcasting in recent editions of the game, but the traditional jack-of-all-trades bard is still alive and well in this build. Additionally, players can select ability cards such as Verse of Spirit to allow allies to gain Channel, a quality that reduces the cost of using Channeled Spells, giving the Glamor Bard plenty of synergy with parties that include one or more spellcasters or magic users.

Other cards are also available to build Guard or weaken enemies, much like the Tempo and Mettle builds. One of the Glamor Bard’s most important cards is Jack of All Trades, which boosts party member damage and weakens all enemies, clearly indicating this build’s broad approach to combat and general versatility. While players won’t be matching the damage output of D&D’s Battle Bard build, the player can build a deck of ability cards that allow Naran to respond effectively to any situation the party finds itself in.

To start with the Glamor build, players should choose the Sonneteer starter deck and put most of their attribute points into Naran’s Intelligence stat to get the best results from the ability cards used for the Glamor build.

Overall, Naran isn’t easy to get to grips with and is arguably a poor choice for the player’s first character in Gordian Quest, given that her main role is party support, regardless of build. Unfortunately, Gordian Quest seems to be keeping with tradition in this case, too, as bards aren’t high on the list of D&D’s most beginner-friendly character classes either. However, Naran’s abilities shine when she has a properly balanced party in between her and the frontlines. When combined with a carefully assembled deck of ability cards and an analytical approach to combat, she can quickly become indispensable to any party of adventurers.

Netflix Now Lets You Use The Spatial Audio of your iPhone...