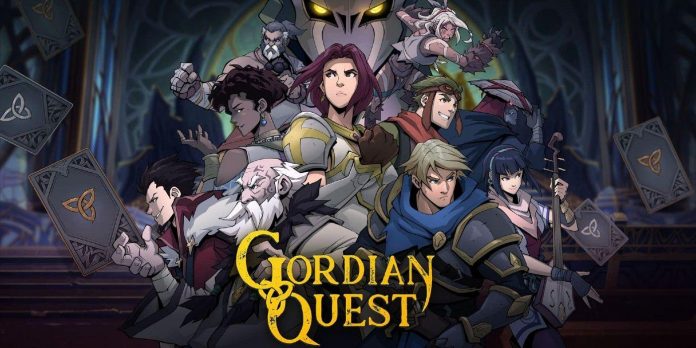 Gordian Quest, which is coming out of Steam Early Access on June 23, is a card role-playing game inspired by Dungeons & Dragons and games like Ultima. Gordian Quest, with turn-based strategic battles resembling SRPGs such as Fire Emblem, is a prime example of mixing multiple genres with effective results. It is also easy to master, which means that it should appeal to a wide audience.

A curse has caused the dead to rise again, and a group of heroes listens to the call of adventure. The terrible state of the world also means that bandits and other criminals are taking advantage, and the monsters are getting braver and getting closer to the cities. Players can choose any character they want — and they can recruit additional group members as the story progresses. The characters themselves are based on easily recognizable and iconic Dungeons & Dragons classes, such as Priest or Bard. The equipment blocks and stats are also inspired by D&D, as are the various abilities that the character can use.

Despite the fact that there is a plot in Gordian Quest, the main gameplay cycle consists of combat stages returning to the central city, called the Garrison, for treatment and equipment improvements, and then returning to fight monsters, wolves, undead, and everything else that poses a threat to law-abiding citizens. Players can choose what difficulty they want, and they can also make the game more (or less) roguelike if they want – for example, whether characters can visit the garrison between stages or they have to complete a full set of stages first. However, the main gameplay cycle remains the same and mostly depends on combat, not on narrative or character interaction.

The game cycle is perhaps the only drawback of Gordian Quest. After a while, it can become repetitive, and some battles lack variety. For those who spend time completing side quests that are great for leveling up before continuing the main story, this is an even bigger problem. Many of them just seem too similar in themselves. For people who are used to playing D&D with friends, this adventure may seem a little lonely — there is no one to laugh or sympathize with if D20 lands on a natural 1, there is no one to celebrate a perfect landing on 20. characters will have to perform skill checks; passing or failing a check can be a source of fun or tragedy in Dungeons & Dragons campaigns, but as a single-player game, Gordian Quest may seem a bit lonely in this regard.

Despite these minor issues, Gordian Quest is a lot of fun and you can spend hours fighting enemies, improving characters and getting loot. Depending on the difficulty settings, side quests, and which roguelike options players choose, each action can take from a few hours to a dozen hours, which means that there is something to do. Although there is a lot of additional content, at least a little of it will be needed to level up and get better gear.

The battle in Gordian Quest is a highlight, wonderfully combining card battles with D&D mechanics. When throwing D20, the order of the game is determined (as when throwing initiative in D&D) and the fight begins. Since characters can only use the abilities of the cards in their “hand”, even more strategy is often required. As additional waves of enemies appear, choosing a powerful move to destroy insignificant power can become a fatal mistake. All the characters are on the grid, which means that moving is equally important. There’s a lot going on, but it never seems overwhelming — and Gordian Quest is good at helping players sort out these concepts in the first act.

There is also the artistic style of Gordian Quest, which makes it one of the most charming hand-drawn video games. It simultaneously resembles the classic D&D cartoon of the 80s, as well as Vox Machina from Critical Role. The animations, though simple, are smooth; the character designs are interesting, and the undead enemies evoke nostalgia for everyone who has played Dragon’s Lair. In many ways, Gordian Quest is similar to the game in Don Bluth’s film, which takes place in the world of high fantasy, and that’s fine.

Even people who are new to D&D or card role-playing games like SteamWorld Quest should have no problem mastering the ropes quickly. While one could benefit from more character interactions and a stronger story, the combat and the main gameplay cycle are so fascinating that many players probably won’t even notice. Gordian Quest is a rare gem of a role—playing game that somehow manages to mix several genres in one game without creating a feeling of bulkiness.

How to Kill or Save the Hackett Family in a Career