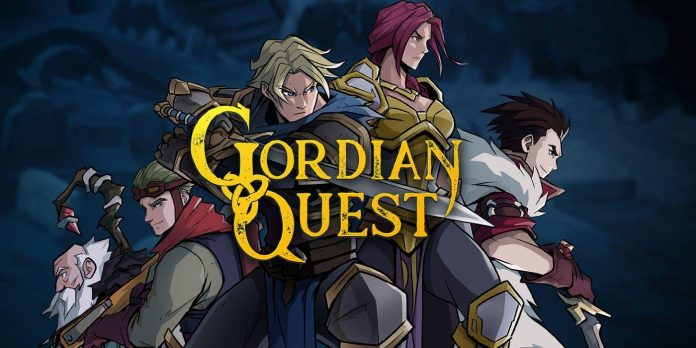 Besides the more obvious D&D connections, Gordian Quest also utilizes SRPG-style combat and roguelike elements. The episodic nature of its acts means the storyline can be tackled in parts. There’s a lot to love about Gordian Quest, and as evident from playing the game and discussing it with Mixed Realms, a lot of love also went into making it.

Gordian Quest just left Early Access on Steam. How does that feel?

We started production on Gordian Quest in late 2019, and released the game on Early Accessin March 2020. Around the same time Covid took the world by storm. Since then, we had beenmostly working from home. Having to work remotely on a project where teamwork was crucialcreated many challenges for us and the entire production took us almost 3 years to complete.Gordian Quest – like our other projects – is a labor of love. We take a lot of pride in developingour games and we are grateful for the positive feedback thus far. An exit from Early Accesssimply means that the game is now at a state where we have put up all the features weenvisaged we would include during EA. But it does not mean we think the game is perfect andthat we are completely happy with it. There are still some improvements we want to make to thegame and you will see us continue chipping away at the stone for just a while yet!

Ultima and D&D are cited as inspirations for Gordian Quest, but what other games orfranchises inspired it?

We see Gordian Quest first as a RPG game before it is a deckbuilder. Therefore, you will findthat we focus a lot on the character building, skill development, and weapon crafting aspects ofthe game. Besides Ultima and D&D, action-RPGs like Path of Exile and Diablo areour next biggest inspirations. Much of the internal discussion was centered around the idea ofcombining deck-building with ARPG design tropes, and the aforementioned titles are in ourmind the kings of the genre. Besides the usual trappings like randomly rolled loot, the skill gridin our game was a big nod to the passive skill tree in POE. The endless experimentation anddeep customization offered was a huge inspiration in that regard.

Gordian Quest’s combo of card-based combat and D&D is great. How did the idea forthat come about?

Thematically, it felt like quite the natural fit as some of us on the team were already bigdeckbuilding fans, while others are tabletop game fans. When it comes down to the battlesystems in these games, both have a lot in common where the satisfaction and payoff comesfrom identifying the threats, coming up with the right formations, and pulling off a successfulcombo.

How did you decide which abilities, enemies, and classes to use in the game?

In fantasy games, there are the usual flavors of classes like the Fighter, Mage, or Thief. Inaddition, most players are familiar with the usual trifecta of DPS, Tank, or Healer. Theintersection of these designations have been well explored in many RPGs, especially throughprestige classes in D&D.

While we wanted to keep the base character identities as something easily recognizable, wealso wanted players to be able to mix and match skills to fully realize the uniqueness of eachhero, so we divided the base identities down into 3 decks, each representing a special variant ofthe class.

For example, the Druid’s decks are called Primal, Elemental, and Animal Kinship. The firstcovers wild and savage fighting and shapeshifting. The second covers mastery and control overthe elements. The last covers the ability to summon and command animal allies. Players canchoose to be any combination of the three, and through this basis we ideated the abilities thatwould fulfill these power fantasies.

Enemies were done in a more straightforward manner, by looking instead at the factions theyrepresented (e.g Undead, Bandits, Spirits) and giving each of them a series of main andsecondary skills.

If you had to choose a favorite class and character, who would it be and why?

Unfortunately, we have to give a cop out answer to this one as almost everyone you ask in the studio will give a wildly different answer! Most choices are influenced by either the hero’s aesthetic, playstyle, or role, and we couldn’t come to a common consensus. There’s a little something for everyone, so here’s a list of comments heard:

Cleric – Everyone loves a cleric on their team, duh.

Druid – Being able to morph into an angry bear is OP.

Scoundrel – The king of criticals.

Spellbinder – So many ways to play him.

Warlock – Manipulating blood is the most metal thing ever.

Monk – As a fan of old-school anime like Dragon Ball and JoJo, nothing beats an angrymuscular man punching the living daylights out of his enemies.

Are there any class builds, enemies, or abilities you liked that didn’t make it in?

While we tried our best to thoroughly explore the most popular archetypes via the hero variants,and enemies via factions, the fact is there are so many creative concepts out there as well asoverlap between heroes that we couldn’t cover them all. The major ones would be:

Necromancer : The original idea was to make use of enemy corpses or summon undeadminions – but with the overlap from Druid’s summoning and Ranger’s sentry construction, theseabilities were instead shifted to “evil-themed” items that can drop from bosses.

Alchemist : The concept was based on mixing and imbibing various tinctures that could granttransformational effects much like in the Witcher, or hurling utility flasks that could damage orhinder foes.

Gambler/Merchant : A hero whose abilities were intertwined with gold, having huge ranges indamage values or being able to support himself with paid help in the form of other NPCs. Whileit sounds fun, there was just too much going on as well as a crazy amount of artwork needed tosupport this concept.

What was the idea process like for each Act? Were there any problems in making each Act feel different?

Each Act was created with an overarching mission in mind. For example, the first Act was designed to be an introductory experience to the world of Wrendia, giving players a more personal stake in defending a city from an undead invasion. As a result, the boundaries of the explorable land don’t stray far from the city, giving it a more intimate feel.

Subsequent acts become more exploratory as the player searches distant lands for clues on the aggressor. This influences the overall size and scope of the maps in these acts, giving it more ofa “grand adventure” scope.

Visually, we differentiated the acts by using a dominant color theme for each of them. Act I uses mostly green and blue to highlight the eerie undead theme. Act II, set in the desert, has a lot of warm tones like yellow and orange. The arctic-themed Act III is almost exclusively white and blue to emphasize the monotony and bleakness of perpetual winters. Finally, Act IV that takes players back into the forgotten city of the Vanai, introduces a lot of purple tones to represent the color of the energy found in ancient Vanaian technology.

The art is another highlight of Gordian Quest. Who’s behind the artwork for the game and what was this process like for building a world with this style?

The art direction was led by Creative Director Edi Torres and supported by Art Lead Kenny Ng, who’s also in charge of the character art; and Kayshim Low, who worked on the environments and most of the cards.

Being a RPG, characters are central to Gordian Quest’s world-building. The original art direction was meant to be heavily anime-inspired but the lead character artist’s style leaned more towards western comic book inspirations. During the early conceptualization stage, the Creative Director and Art Lead explored a few styles until they found one that managed to combine the charm and quirkiness of anime with the sharper and inkier form found in most western comic books.

Now that Gordian Quest has been released out of early access, are there any plans moving forward? Can we expect future updates or DLC? Maybe a sequel?

A sequel is not currently on our minds as we want to continue supporting GQ post-launch. Our most immediate plans moving forward is a smaller scale patch at the end of July that is intended to add full controller support, as well as improve on the game based on the feedback that we’ve received.

After that, we have various platform ports in mind such as the Switch and consoles. As for future content or DLC, it’s something we’re keen to get started after all the above. At this time, we’re actively taking in comments and suggestions from players to see where the interest lies.

Is Crisis Core Reunion part of the FF7 Remake universe