Home Science Goosebumps: The Most Brutal Experiments In History Human history has witnessed many cruel experiments. In this article, we take a closer look at some of those chilling experiments.

Technology and science have developed throughout history and aimed to make people’s lives easier. But in order for some technologies to be found or tested, sacrifices had to be made. Some experiments were aimed only at pure evil. In this article, we will cover the nuclear tests conducted in the Marshall Islands, the MKUltra project, in short, the most brutal experiments in history.

Nuclear tests in the Marshall Islands

During World War II, the USA hit the Japanese cities of Hiroshima and Nagasaki with atomic bombs. But despite the end of the war, America could not calmly watch the accelerating work of the Soviets on atomic and nuclear weapons. For this reason, the American government established the Atomic Energy Commission and tested 67 nuclear bombs in the Marshall Islands between 1946-58. The United States has conducted hundreds of nuclear weapons tests, large and small, in the Marshall Islands. The largest of these was the Castle Bravo hydrogen bomb, which was dropped on March 1, 1954. Castle Bravo was about 1,000 times stronger than the Little Boy dropped on Hiroshima.

All these tests have caused serious health problems for the inhabitants of the Marshall Islands, and their effects continue to this day. Beginning in 1969, the United States carried out large-scale cleanup and decontamination efforts on the islands where the experiments took place. The Republic of the Marshall Islands (RMI) was established in 1979. The country has made some important social and military partnerships with the United States. In addition to all this, America agreed to pay compensation to the victims of the experiments.

Laika, the dog sent into space

When the dates showed the year 1955, the Space Race between the USA and the Soviet Union officially started. Both superpowers aimed to dominate space and use it for their own interests. The US owned the Nazi engineer Wernher von Braun, while the Soviets owned the factory of V2 rockets. 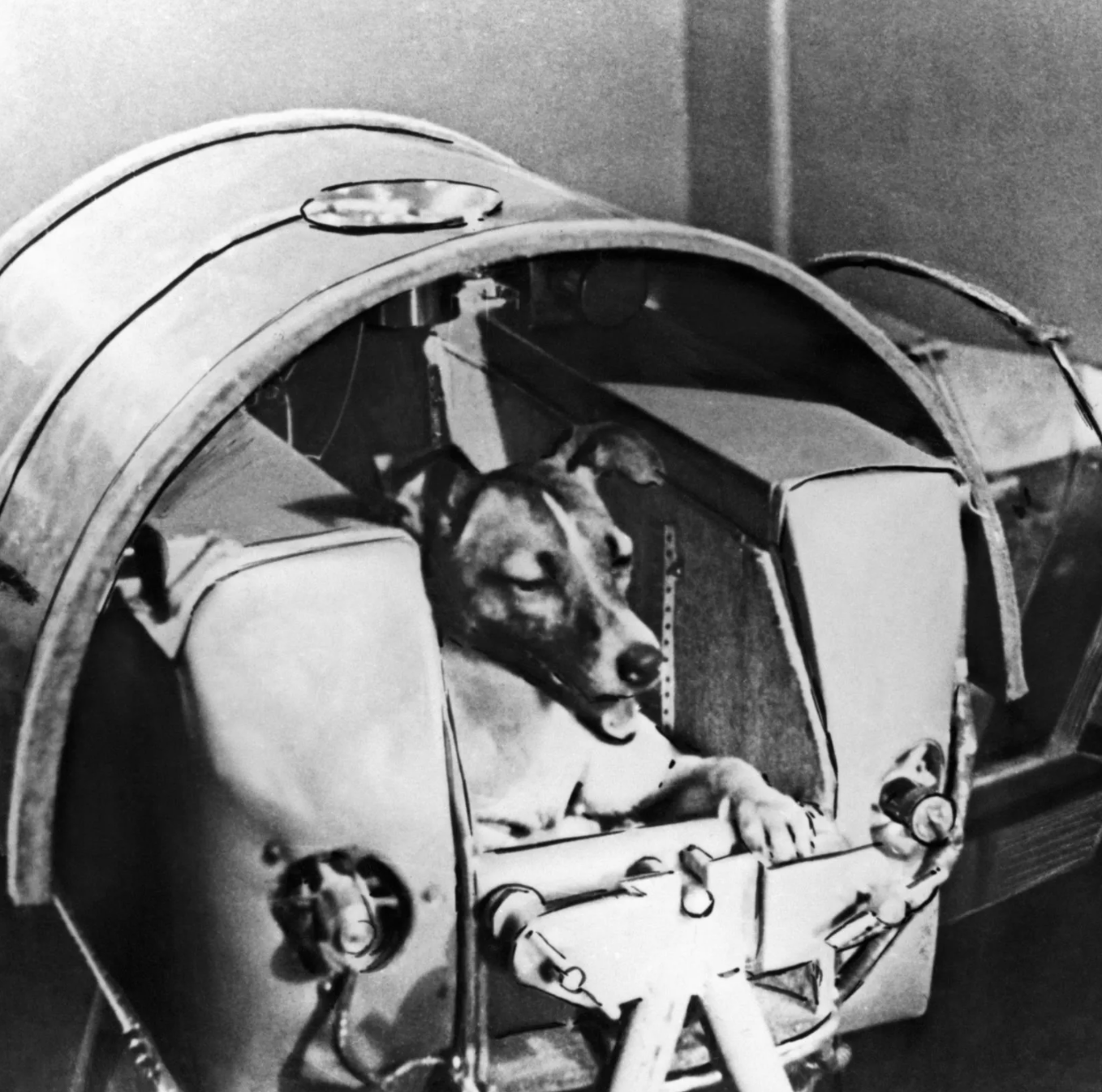 Laika inside the Spunitk 2 spacecraft

Sergey Korolev, the key figure in the Soviet space adventure, designed his own R7 rocket by solving the engineering of V2 rockets. On October 4, 1957, Sputnik 1 launched its artificial satellite R7 into space. After the incident, the Soviet Union decided to send the first living thing into space.

A hybrid dog named Laika from the streets of Moscow was chosen as the victim for the mission. Laika was launched into space on November 3, 1975 by the Sputnik 2 vehicle. But 3 hours after the launch, the problem caused by the separation of the rocket and the spacecraft caused overheating and Laika died in space.

The Space Race continued. By now, the Soviet Union had sent the first man into space. America followed behind them. After the return of the US President John Kennedy’s words, “I believe that this nation will land a man on the Moon and bring it back successfully in the next 10 years,” the work gained momentum.

On January 27, 1967, the United States made the first flight of the Apollo program, launched to study the Moon and send humans there. During the testing phase of the Apollo 1 spacecraft, a sudden fire broke out in the capsule. As a result of this incident, three astronauts Gus Grissom, Ed White and Roger Bruce Chaffee lost their lives.

Japan had occupied Manchuria during its war with China. Wanting to gain strength against the United States, the Japanese began experimenting with biological weapons on animals in Tokyo in 1920. Between 1932 and 1945, the Japanese carried out many cruel and blood-curdling experiments on the people here. Ten thousand people lost their lives in the terrible work. The unit forcibly closed people in glass rooms, released poisonous gases into these rooms, and performed anesthesia-free surgical procedures.

Also here are the scientists; He measured the impact of grenades, cannons, guns and other ammunition on people. In 1945 Japan lost the war and Unit 731 disbanded. The key figures of the unit managed to escape to Japan. The work of the unit was also supported by the USA.

The Cold War between the USA and the Soviet Union continued on every front, from space to daily life. One of the most important lines of the Cold War era was the war of espionage. After the Korean war, the CIA received intelligence about the Soviet attempt to brainwash American soldiers.

The CIA Director of the time, Allen Dulles, after this intelligence, changed the institution to brain control he was commissioned to conduct research on the subject. The team initially saw LSD as the most viable option. Thus, the MKUltra project was launched behind closed doors. MKUltra’s goal was to turn people into involuntary killers.

More than 149 subprojects of MKUltra were implemented, of which 6 victims were unintentionally involved in the experiments. Journalist Seymur Hersh, who worked for the New York Times in 1974, announced the project to the whole world. The CIA has used hundreds of different experiments over the years to control people’s intelligence.

Electroshock, LSD, cannabis and other psychotropic substances were some of the main methods of these experiments. But despite all the efforts, MKUltra failed. Although the loss of life in the project was small, thousands of people suffered from health problems due to the experiments and were hooked on narcotic substances for many years.

Scientists Have Succeeded to Create the Clone of the Coronavirus