Home Tech Google Pixel 4a Revealed On A YouTube Video 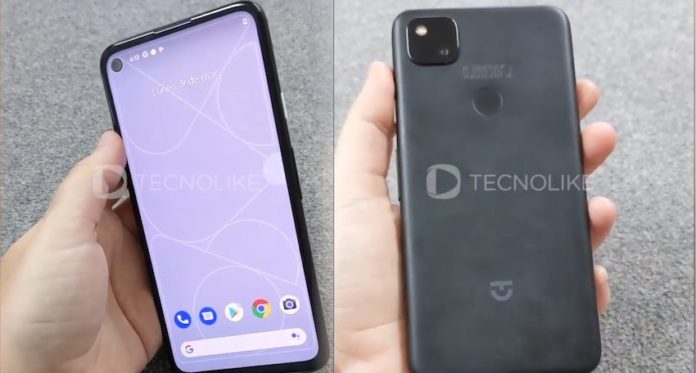 One of the most anticipated smartphones of recent times, Google-signed Pixel 4a appeared on a YouTube channel called TecnoLike Plus. The shared video included features and design of the phone along with live images.

Pixel’s 4a, Google’s highly anticipated affordable smartphone, was clearly displayed for the first time in recent days. The smartphone, which attracts attention with its interesting cover in these images, is now displayed in the review of a YouTube channel called TechnoLike.

The video features the phone’s features and design. Let’s take a look at the video first, then talk about the features of the device in the video.

Video with Google Pixel 4a:

Starting with the design of the smartphone, the Google Pixel 4a comes with a 5.81 inch screen. Unlike recent flagships, this screen offers a screen refresh rate of 60 Hz instead of 90 Hz, and also supports 1080 x 2340 pixels resolution. Unlike the Pixel 4 series, the selfie camera of the phone seems to be placed in the upper left corner of the screen with a “hole” design.

The smartphone, which is expected to take its power from the Snapdragon 730, one of the most popular processors of the middle segment, uses 6 GB of RAM, which can be considered strong compared to a middle segment device in the memory part. Coming to the storage point, Pixel fans may be a bit disappointed if the claims are true, because it is stated that the phone will have 64 GB of internal storage.

Google Pixel 4a will come with a single rear camera:
Even in today’s entry-level smartphones, at least two rear cameras have become a standard. At this point, Google, who is known for the camera capabilities of his devices, will be very confident in the camera lens he uses on Pixel 4a, which has placed only one rear camera on the device. This single camera with 12 MP resolution is said to include 4K video recording and Digital Image Stabilizer (EIS) support.

Finally, if we talk about the connection and battery features of the device, Pixel 4a is expected to be released with a 3.5mm headphone jack placed in the upper frame. On the other hand, the device also contains a 3.080 mAh battery that can be charged via the USB-C port.

Technology giant Google announced its Pixel 3a model at the Google I / O 2019 event held in May last year. At this point, canceling the Google I / O 2020 event due to the Corona virus may have caused the company to change its plans and postpone the promotion of Pixel 4a. As a result, we can say that it is too early to say anything definite about the introduction date of Pixel 4a.

YouTube Music gets a new look! Here is the appearance