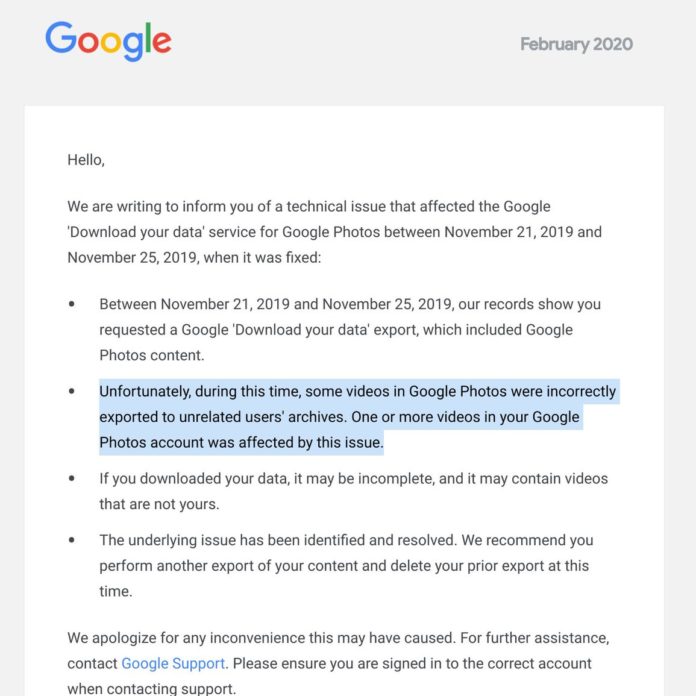 Users can download their data as backups from Google applications with the Google Takeout service. However, a problem with the Takeout service caused videos in Google Photos to be transferred to other users’ archives.

Google Photos has become the easy way for many people to back up their photos, videos today, and it stands out as an attractive option with unlimited storage. Unfortunately, the videos you backed up may have gone to other users’ accounts due to an error in Google’s data export service.

According to Twitter user Jon Oberheide, Google sent an email to users between 21 and 25 November to report an issue affecting the Google Takeout service’s data export service. The resulting error also includes Google Photos content and causes some of the videos to be viewable by other users when requesting a backup.

“Unfortunately, during this time, some videos in Google Photos were accidentally transferred to other users’ archives. One or more videos in your Google Photos account were affected by this issue,” Google sent to inform users of the error. The warning is included. Google added that the data downloaded during this period may include videos from other users. In addition, users were advised to delete their previous data and perform another export.

It is an important issue that users’ videos go to other people’s accounts, and the company explained that less than 0.01% of Google Photos users are affected by this issue. This seems like a small proportion, but it means 100,000 people for a service with a billion users. Google stated that after the error, the problem was solved and the photos were not affected by the error.

OnePlus CEO: OnePlus 8 Will Be the Most Beautiful Flagship Series