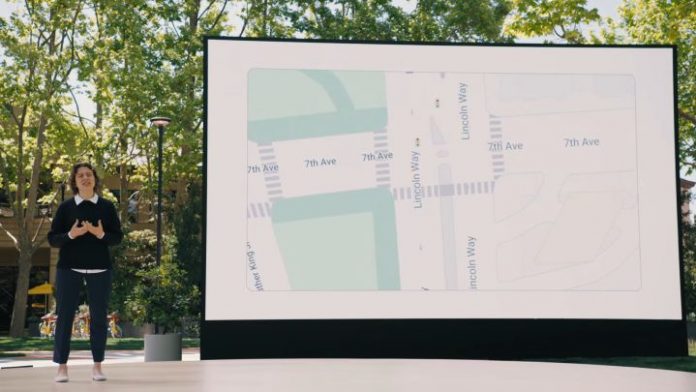 Google Maps: Another of the great improvements that the great G has launched during its Google I / O 21 has been directed to one of its most used apps: Google Maps. The company is aware that each time users use it to find the most emblematic places of the place where they are, a nearby place to sleep or a cafeteria where they can rest for a while. The company takes this into account and that is why it will integrate improvements with augmented reality.

Google Maps is the cartographic application par excellence and is present on all devices. Especially, smartphone users are the ones who get the most out of it thanks to the fact that they can take the app anywhere and use it when they need it. But its service extends beyond giving directions as if it were a virtual map.

Thanks to functions such as augmented reality, it is easier than ever to follow these instructions. This is where the Mountain Viewers want to emphasize. One of the improvements that has been shown in the Google I / O 21 has been an improved experience in the app. This implies the integration of the names of the streets if you see them in AR as well as the buildings and shops that you have around. At this point it is important to point out that the premises will have information about their schedules, something interesting for those who seek them or to know if it is closed or not.

Another novelty has to do with the interiors of the buildings. Here it is important to note that the application will tell you up to the stairs that you have to take to get to a point that you need to visit. This feature will be available in some places such as department stores, airports or train stations.

Another point that the Mountain View company has focused on is detailing Google Maps. This can be done with a feature that we have talked about at some point and that was in the testing phase. We are talking about the integration of pedestrian crossings as well as lane indications for cars and traffic lights.

The other improvement does not have to do with where, but with when. As the app is not always used at the same time of day, and not all establishments are equally relevant at all times, Google will be smarter when it comes to giving you suggestions. Depending on the time, you will see with more or less relevance the establishments that may be useful to you. The clearest example is that of restaurants starting at eight in the afternoon or cafeterias at nine in the morning.

The other novelty of Google Maps of Google I / O 21 has to do with the congregation of people in a place. Using the information from the phones, Google Maps will tell you which parts of a city are crowded and which are not. This tool can help you better plan your route and avoid crowds, especially in these times.