It has been almost a year since Google last updated the official graph showing the distribution of devices between different versions of Android. This was a way of knowing how the operating system market was doing in terms of updates and also diagnosing how fragmented the sector was. In addition, it was information that rival Apple used to nudge the competition, since it does not face this same problem with iOS updates.

However, the company still makes this data available, but in a much more hidden place – and it remains equally bad for the company. Who found the information was the 9to5 Google site.

Apparently, the only way to access this chart now is from Android Studio, the development platform for applications and services in the operating system. Check out how this information is made available there: 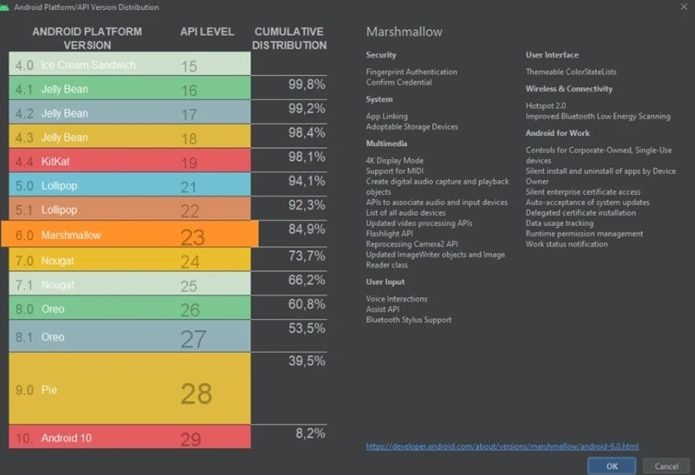 The objective is clear and purely technical: to indicate to programmers which versions are the most accepted, so that they work on making the app available to as many users as possible. However, any user can access this information, as was clear from now on.

The Android situation
According to the data displayed in Android Studio, which are probably updated until March 2020, the distribution of the different versions of the system is as follows:

As you can see, the most widely adopted system is by far Android Pie (9.0), which in fact managed to reduce market fragmentation a little. However, adoption of the latest, Android 10, is quite low, leaving the version in fourth position – and even entire annual updates, like Oreo and Nougat, have different secondary builds, which makes the sector even more spread out.

Android 11 is already in Beta for developers and should be officially launched in September this year, probably helping to make the above list even more confusing.