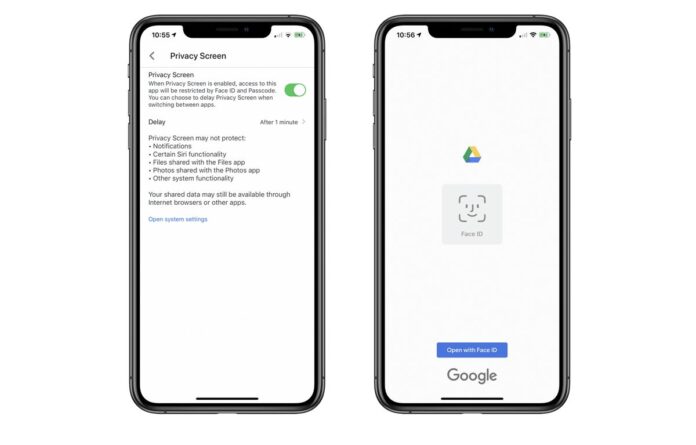 File storage and synchronization service Google Drive launched another innovation. With the Face ID and Touch ID features for iPhone and iPad, users’ security on the platform has been increased.

Google; Launched the new Privacy Screen feature for Google Drive on iOS and iPadOS. This feature requires Face ID or Touch ID authentication when anyone tries to open the app on your device. Safe use comes first for Internet users. With the innovation coming to Google Drive, users’ important documents and sensitive personal files will be protected.

With the update, it is possible to choose to activate the Privacy Screen immediately as soon as you move to another application. When you return to Drive, the Face ID and Touch ID screen will open. However, it is worth noting that the Privacy Screen is not completely flawless. Google warns that it cannot protect certain Siri functions, files shared with the Files app, photos shared with the Photos app, and other system functions on the settings screen you enable.

Google Drive introduced Face ID and Touch ID for high security:
Google first announced the feature last month, but it appears to be rolling out to the newer extent. The Google Drive app was subject to password protection attempts a few years ago. Therefore, it is a good development to see that the platform, which is in the daily service of many users, has a new security measure in addition to the standard PIN code.

The Privacy Screen is a new feature that uses Face ID or Touch ID to protect sensitive files from ‘prying’ eyes. Bug fixes and performance improvements were also included in the update. We can say that the files will be more secure in the cloud storage service. As long as developments regarding Google Drive continue, we will continue to convey this to you.