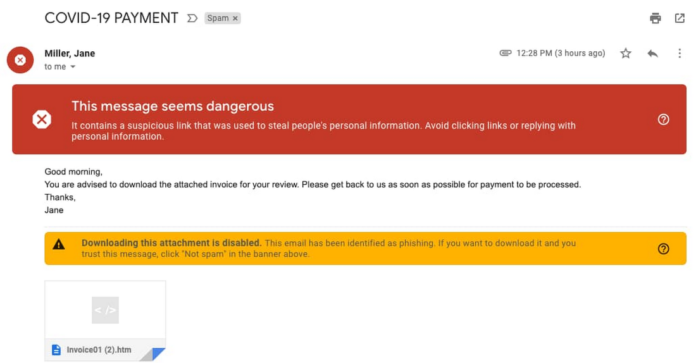 According to a statement by Google, 18 million malware-related emails were blocked in Gmail last week. Google has also announced that it blocks over 240 million COVID-19 spam emails every day. The company noted that the machine algorithm successfully filtered spam mail 99.9%.

Technology giants are also forced to work hard during the new deadly coronavirus (COVID-19) outbreak that has spread around the world and has caused the death of 154,686 people since it emerged in Wuhan, China. Not only support the fight against the epidemic, but also prevent malicious people from exploiting the epidemic is part of this fight.

In the ongoing public health crisis, technology companies are also trying to prevent the spread of spam and false information. In a statement made by Facebook yesterday, it was stated that new measures were taken to reduce the spread of false information on the platform. In a statement by Google, it was stated that only 18 million coronavirus linked emails were blocked in Gmail during the past week alone. The number of daily spam emails blocked in connection with the coronavirus is over 240 million.

They look like WHO or the state and want money
Stating that the machine algorithm successfully filters spam mail 99.9 percent, Google points out that the most common demand in the most common spam mail is to act like the World Health Organization (WHO) or government agency and ask users to pay donations or incentives. Saying that they ‘proactively monitor’ COVID-19 related frauds, the technology giant stated that the malware used in many examples is not new, only known methods are used repeatedly to exploit the COVID-19 outbreak.

Google stressed that when they detect a threat, they add it to the Safe Browsing API, which protects its users in Google Chrome, Gmail and other integrated products. Noting that Safe Browsing protects over 4 billion devices every day, Google reminded that this feature warns users if they enter dangerous websites.

Google recommends the following to increase your security and secure your data:

Complete a Security Checkup to increase the security of your account
Avoid downloading files you do not know; use Gmail’s preview instead
Check the accuracy of the URL before providing your login information or clicking on a link because fake URLs often mimic real URLs
Avoid feeding emails and report them

Join Google’s Advanced Protection Program (APP), so far we have not seen anyone joining the APP, even though they are repeatedly targeted

OnlyFans Launches App for Android and iOS, But No Nudes