Home Entertainment “Good results for the Reds!” – Liverpool Fans React to The Trio’s... 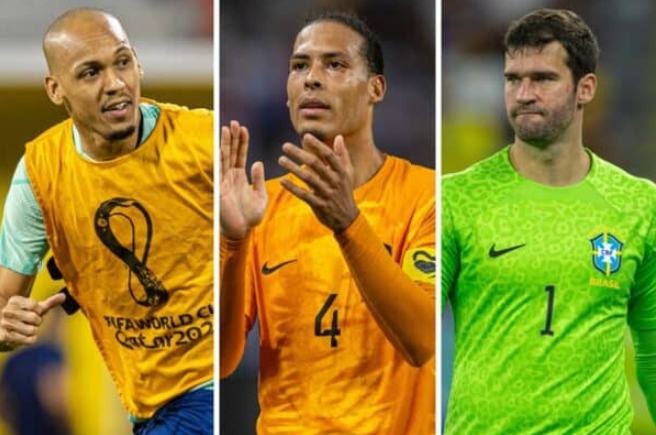 Three Liverpool players saw their World Cup campaigns come to an end on Friday, and there will be at least one more on Saturday.

Alisson, Fabinho and Virgil van Dijk will now get a well-deserved break after Brazil and the Netherlands were defeated on penalties in the quarterfinals.

It’s a tough road out of the tournament, and the players themselves will be devastated that they didn’t make it to the last four, but it’s no surprise that Liverpool fans have embraced the news that three key players should be available for the Reds’ busy upcoming schedule.

Like Darwin Nunez, all three will be given at least a week off before they get back together with their Liverpool teammates.

This means that they are unlikely to play any role in the warm weather training camp in Dubai, as the team is going to return to Merseyside after the friendly match with Milan, which will take place next Friday.

However, they can compete against Man City in the League Cup on December 22 and should definitely be ready to play when Liverpool return to the Premier League against Aston Villa on Boxing Day.

A heartbreaking Friday for three key Reds players, but Liverpool fans are glad they will be back in the game sooner rather than later:

All in one day

Either Trent/Hendo or Konate tomorrow too.

Sad for them but should be back for Villa (a) 26th

Alisson, Fabinho & Van Dijk all getting a nice little week off now before resuming training, hopefully Mbappe can give help give Trent, Hendo & Bellingham that week holiday too

Good results today for the Reds. Alisson, Fabinho & Van Dijk back in time to prepare for Villa away😀 pic.twitter.com/xiNc4OnYH4

With England set to face France in the quarter-finals on Saturday night, Trent Alexander-Arnold and Jordan Henderson or Ibrahima Konate will also complete their time in Qatar this weekend.

They, too, will probably be able to play a role in the festive matches of the Reds.

In contrast, Liverpool’s next opponent, Man City, still has a number of players involved in the World Cup, and Jurgen Klopp will probably be able to field a stronger squad than his counterpart at the Etihad Stadium later this month.

Nunes, whose Uruguayan team did not make it past the group stage, is due to join his Liverpool team-mates in Dubai on Monday.

Politician Blames ‘Masculinity Criticism’ For The Increase In Men Playing