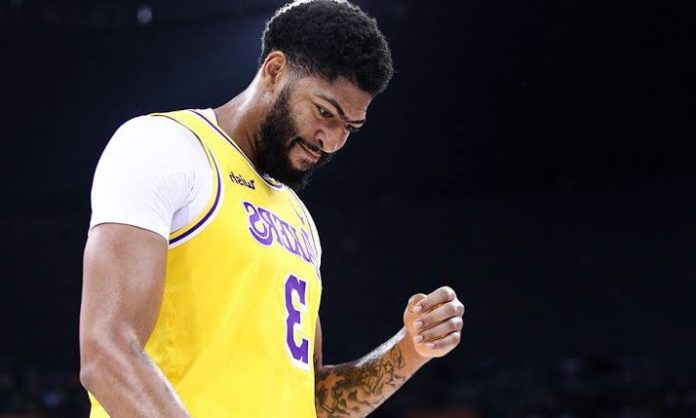 Pivot wing Anthony Davis suffered a big toe injury during the match against Brooklyn Nets in China last Saturday. At the time, the athlete left the court after a twist in his right big toe, having acted for only 12 minutes in the confrontation.

An MRI should have been performed as early as Sunday, but the Lakers flight was delayed and the procedure only took place on Monday. Despite the delay, the news is good for the purple and gold fans. According to reporter Adrian Wojnarowski, the exam showed no ligament damage:

“Anthony Davis’s right big toe MRI came back clean today, league sources confirm for ESPN” – Adrian Wojnarowski.
Even so, as a precaution, as it is preseason, the Lakers opted to rest not only Davis but also LeBron James in the next match against Golden State Warriors. The information is from Chris Haynes (Yahoo):

It is unclear whether AD and LeBron will rest more than just a match, but it is a prudent move by the Lakers medical and technical committee, especially after a long and tiring trip the team has just made to China.

Today’s match starts at 23:30 GMT and will be played at the Staples Center in Los Angeles. In the first preseason match, the Lakers went to the all-new Chase Center in San Francisco and beat the Warriors team.

Without the presence of the two stars, coach Frank Vogel will be able to better observe other athletes looking for space in rotation. With only 28% improvement on the three-ball in the early games of this preseason, it is safe to say that the player who finds a good throwing pace will be able to take important steps towards a spinning spot.